Dear Jeff: "When Drivers Hit Pedestrians, Where Do We Lay the Moral Blame?" 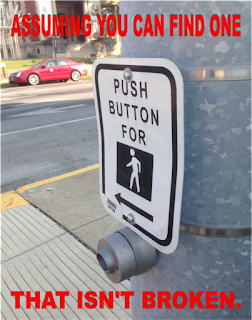 So why do so many people blame the pedestrian?

Earlier today, I was walking on Spring Street, the world’s longest interstate entrance ramp, as recently certified by the Guinness Book of World Records.


At one point, three of four vehicles coming past -- probably all of them traveling between 35 and 40 mph -- shared a single feature in common.

Their drivers, two men and a woman, were staring at mobile phones.

When Drivers Hit Pedestrians, Where Do We Lay the Moral Blame?, by Peter Simek (Front Burner blog at Dallas Magazine)

... When your city is constructed in such way that it values efficiency and speed for vehicular traffic above all else, taking every opportunity to create a thoughtless, unobstructed environment for drivers, that design teaches the people who live in the city that the public realm values the car over the pedestrian. When a pedestrian interrupts the vehicular environment, he or she demonized for stepping out of line. They are judged to be thoughtless, reckless, or irresponsible because they have invaded a space that the city has instructed us belongs to cars.