Read my profiles of Donum Dei Brewery and Floyd County Brewing Company in the latest issue of Food & Dining Magazine. 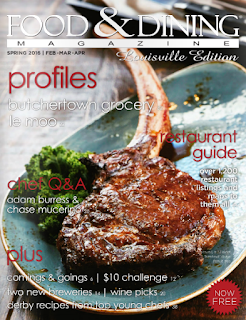 Glossy, tactile copies also can be snagged at hundreds of locations throughout metropolitan Louisville.

For the current edition, my "Hip Hops" column is given over to profiles of Donum Dei Brewery and Floyd County Brewing Company. By my reckoning, New Albany has not been home to three brewing companies in 109 years.

Why does it matter? According to writer James Fallows, there are 11 indicators of civic success, one of which is the presence of "craft" breweries:

One final marker, perhaps the most reliable: A city on the way back will have one or more craft breweries, and probably some small distilleries too.


Congratulations to my brewing brethren. In the next issue, I'll be writing about Goodwood Brewing Company in Louisville. 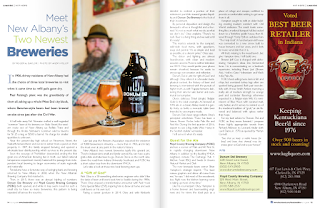 ... Pendulums have a fortunate way of swinging back, and brewing returned to New Albany in 2002, when the New Albanian Brewing Company first mashed in.

Then, in 2015, there was an abrupt tripling of numbers: Donum Dei Brewery and Floyd County Brewing Company (FCBC) both opened, and while it may seem novel for such a small city to have so many breweries, this pattern is being repeated all across the country.


For those just learning about Food & Dining Magazine:

Food & Dining is a Louisville-based lifestyle publication focused on food & cooking, the enjoyment of wine & spirits, and the experience of dining out in one of the nation’s top restaurant cities.

We have all the sensibilities of a local magazine, but with the design and photography of a national magazine.

We pack the magazine and with gorgeous photography, engaging feature stories, entertaining articles, unique recipes and a restaurant guide that details over 1,000 restaurants.

The quarterly magazine began in 2003, and I started writing beer columns for John Carlos White a few issues into his run. The mag's his baby, and I'm delighted for him. Lots of other folks have played a part in launching and maintaining the publication, so thanks to all of them, too. May there be many more to come.