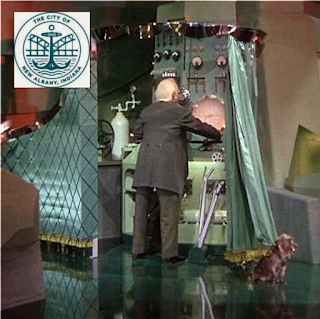 During Monday evening's city council meeting, there was much discussion about the way our governmental branches should best interact. What is the healthiest balance between what the mayor wants, and what the council is bound to examine, in terms both of financial impact and plain viability?

Some of these thoughts may even have been non-partisan, although it's always risky to assume the best.

However, the single most telling comment came from a frequent observer, just before the meeting started.

"When's the last time that Mayor Gahan came to a meeting?"

If memory serves, it was about a year ago, during the Pillsbury crisis. Other mayors make "state of the city" addresses live, in person, before the elected body with which they must work. Ours releases a video, and a steady stream of press releases.

Note the irony of the newspaper's coverage. I'd like to think Morris phrased it this way on purpose, for after a meeting taken up by talks about the absentee mayor's forthcoming wishes -- hinted at only euphemistically by his offensive linemen, who of course were in attendance, there was this.

... After the vote, New Albany Mayor Jeff Gahan released a statement thanking the majority of council members for voting down the ordinance so 2016 projects could move forward. He said the administration will soon be introducing capital improvement projects in the coming months that will include historic preservation, pedestrian and bicycle safety, facade improvements, environmental preservation, public art and city beautification.

You would think that Mayor Gahan would like to be better than Doug England, wouldn't you? England didn't attend every meeting by a long shot but he was there several times a year. You could talk to him after a meeting. He communicated directly with the council--not filtered by his subordinates. England-1, Gahan-0.