Keg Liquors Fest of Ale will move to New Albany's Riverfront Amphitheater in 2016; the 11th annual edition slated for June 4. 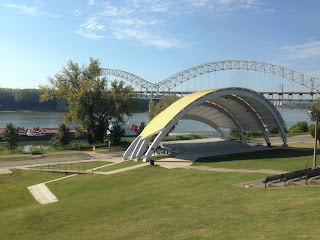 Saturday, June 4th remains the date for the 11th Annual Keg Liquors Fest of Ale, but the 2016 edition of the festival will be held at the Riverfront Amphitheater in New Albany.

Fest of Ale on the move.

New Albany, Ind. (February 2016) – After 10 successful years in Clarksville, the Keg Liquors Fest of Ale is changing venues. The 11th Annual Fest of Ale will be held on June 4th, 2016 at the New Albany Riverfront Amphitheater.

“Moving the event was a tough decision, but we felt that we had outgrown the space we were using at St. Anthony’s,” said Todd Antz, owner of Keg Liquors. “St. Anthony’s has been very generous with their facilities and support over the years, and we could not have grown the event to the size it is today without their help.

"We felt that the event was becoming a bit too taxing for their neighbors and parishioners, and that it was best for both parties if we moved on. We’ve always had a great relationship with St. Anthony’s and look forward to working with them in any future opportunities that may come up. I can’t thank everyone at St. Anthony’s enough for their support over the last 7 years of hosting our charity event. We could not have done this without them.”

The New Albany Riverfront Amphitheater, located below East Main Street at the foot of Pearl Street, is home each spring and summer to numerous free concerts, productions, festivals and other events.

The move to the Riverfront Amphitheater will allow the Fest of Ale to expand in size, provide more parking, as well as having access to all of the great restaurants and businesses in downtown New Albany.

“The Fest of Ale has always been a grassroots festival that promotes independent breweries and businesses, so moving the event to an area that has reinvigorated itself with all of the great shops and restaurants made perfect sense to us,” continued Antz. “The City of New Albany was very excited to help us with the event, and we look forward to working with them to make this the best Fest of Ale ever.”

Tickets for the 2016 Fest of Ale will go on sale at the beginning of April.