The fee for residences was lowered from $3 to $2 at the insistence of Councilman Larry Kochert, saying residences should get a break. The council approved that amendment. (Mayor James) Garner said lowering that cost would cut $175,000 to $200,000 from the budget, which would take away money from drainage project costs. 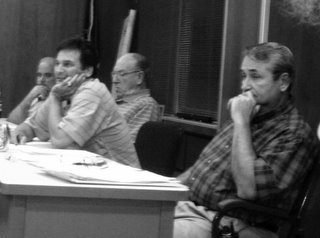 The Gang of Three? Kochert keeps his distance, at least for one night in November.

I will have to give Larry Kochert credit on this one he saw the wisdom of voting yes and put politics aside last night for the good of the city, thank you Larry.

Predictably Coffey saw the meeting last night as an opportunity to start his sure to fail campaign for mayor and accuse me of being in the mayor's hip pocket.

When the Mayor asked me to serve on the storm water committee he and i both agreed to treat each other respectfully and to disagree civilly, just so happens on this issue I agree with the Mayor.

Will I disagree with the Mayor on other issues, likely but respectfully so.

I have never been and will never be in anybodys "hip pocket" I have my own mind and my own opinions, but unlike the boorish and classless Councilman Coffey, I will debate and discuss the issues civilly and in the words of former Republican President, George Bush, "Read my lips"

In my view, Mayor Garner is showing real leadership now and if the election were held today he would have my vote.