Up with "liberal" drinking, down with Wally World, and other activities scheduled this week.

Surely Ayn Rand's epic novel "Atlas Shrugged" would have been half as long if the hero, John Galt, had chosen to achieve his goal of stopping the motor of the world the truly easy way -- by building a Bass Pro Shop.

Meanwhile, artificial reality aside, it's a packed calendar this week, so pick carefully. One request, please: Owing to the necessity of setting aside seating space at Rich O's for Tuesday's Drinking Liberally gathering, might those planning on attending please drop me a private e-mail, or comment below, and provide a (non-binding) RSVP?

Drinking Liberally comes to Rich O’s Public House for a 7:00 p.m. session. Readers who are nodding in agreement with the organization’s stated aim of spreading democracy “one pint at a time” are encouraged to attend. While we're not expecting the city council's Gang of Four to be among those visiting, they're certainly welcome to drop in, quaff Progressive Ale, and justify their political existences.

Previously in NAC, we told you that CFP and Destinations Booksellers are to screen "Wal-Mart: The High Cost of Low Price" documentary film on Nov. 16. It’s an outdoor showing (at 6 p.m. and 8 p.m.) at the Farmers’ Market, corner of Bank and Market in downtown New Albany. We're not expecting the city council's Gang of Four to be among the visitors, but they're certainly welcome to drop by and cast a symbolic vote for social consciousness.

Here are links to five articles about Robert Greenwald's film: 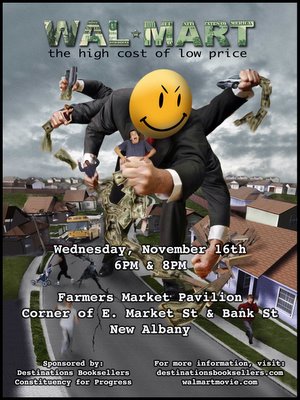 Five Questions for Robert Greenwald, by Sam Graham-Felsen (web-only feature from The Nation).

What a deal: Wal-Mart’s phenomenal growth is the result of sweetheart deals and taxpayer subsidies, by Greg LeRoy (from AlterNet, reprinted in Louisville Eccentric Observer). 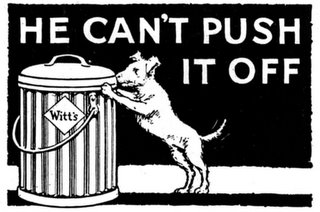 New Albany’s City Council meets on the third floor of the City-County Building. Considering the rapidly approaching necessity of resolving the city's Great Sanitation Debate of 2005, and with diminished opportunities for populist grandstanding, it is expected that 3rd District CM Steve Price will finally reveal the details of his months-long search for stray nickels and dimes in the budget, in the process piously repeat numerous Farmer's Almanac homiles that subsequently will be cited as original wisdom by anonymous troglodytes fondling their garrottes.

Here's the most recent media coverage of the sanitation situation: Rate increase a last resort for sanitation, by the New Albany Tribune's Amany Ali.

Also on the 17th, the East Spring Street Neighborhood Association will be holding its monthly meeting at Muir Manor on Spring Street. This should be a good one, with discussions on a neighborhood plan slated to take place.

RSVP 1 to check this thing out.