Bad Elf freed in Connecticut ... but the "fight is definitely not over."

In October, we first learned of a "criminally" Bad Elf wreaking havoc in the state of Connecticut: Importer and blue noses square off in Connecticut's Elf beer ban. 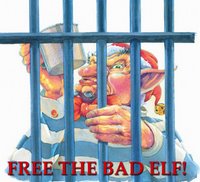 As the riotously funny beer importer Dan Shelton reports on his importing company’s web site, there’s been a parole of sorts.

All right, so many of you now know that the State of Connecticut has seen the error of its ways and has agreed to approve our Christmas beer labels. Unfortunately for the good people of Connecticut, they still may not be able to buy these beers this year, but more about that in a day or so. The fight is definitely not over.

The highlight of Dan’s account of his journey into the heart of bureaucratic darkness comes when he reprints comments received by his company since the story hit the wires, and among them is the following gem that deserves consideration in its punctuationally-challenged entirety:

Glad you think you won. By making a mockery of our State Liquor Division by crying about your 'Free Speech'....give me a break. You ARE profiting by using a symbolism that in our state is rightfully illegal to do. Shame on you. Those regulations are in my eyes prudent and most necessary. Children learn from a young age that alcohol abuse is acceptable. Leave a bottle of your swill around with your XMAS Characters...Jr. won't think it's cool to pick up Mom and Dad's nasty habit....Well, due to your Company's arrogance in deciding to skirt our laws, I think maybe it's time for a good 'ol fashioned BOYCOTT ..yep.. You people are the worse case and a Poster Child on how NOT to be a re= sponsible company. I hope you're SUED for negligence. Damn beer drinkers are scum.

Really, all that's missing is "Confound Taxpayer" or "$$$$$$" as a signature, a disparaging reference to the incumbent Mayor, and “jus’ my ‘pinion” at the end, and it might have been written by an anonymous New Albanian doing the "Trog Sham (an)'s Blues" karaoke at the Luddite Bar & Grill.

Come to think of it, maybe it was ... if so, come on over to Rich O's and visit on December 16, when Seriously Bad Elf will be served on draft during our Saturnalia winter solstice festival:

That sounds good Roger, i will look forward to sampling the bad Elf Draft, cheers ! And if the mayor shows up, i think i will buy him one for his hard work and new leadership he is showing despite what the SOLNA crowd thinks, maybe we can have a SOLNA fest with all the industrial swill you can handle for a mere $3.00 the same price of one month's interim stormwater fee, could even throw in some Wal Mart gift certificates as a door prize.

I have to admit that I am ignortant on what the symbolism that is illegal in Conneticut. Can you enlighten us?

HB, it's the usual blather about children seeing a bottle of beer with an image of an elf or Santa on it, and thus desiring to become alcoholics.

Humorlessness may be a national trait.

There was report yesterday that Whole Foods is being threatened with legal action if they open as planned on Thanksgiving in Massachusetts. Somehow, "what the fuck", appears appropriate in this context.

This article shows the hundreds of things that children are exposed to much worse than an elf with a beer.

They need to get their priorities in order.

"Childhood For Sale
Consumer culture is pervasive and invasive. It is targeting kids in surprising and troubling ways -- with harmful consequences."

Umm right, here's the thing. If a 7 year old see's a bottle of beer with an elf on it, I don't think the kid is going to run out and start paying the local whino to buy him a 30-pack of PBR.

Secondly, oh hell there is no secondly! That's a dumb idea, and it is people trying to make responsible a group other then the parents for keeping en eye on their kids and providing a good role model for kids.

Personal Responsibility
BRING IT BACK!

A 30-something German man I met in Ecuador once told me that he didn't understand all the fretting about underage drinking - he had drank beer regularly from the age of 6 (and had 2 MAs and a Ph.D.). He wondered if the annoying proclivity of Americans to binge drink was linked to our puritanical hysteria about such things. This Bad Elf issue make wonder if he wasn't right.

RAB I am reminded of what Christopher told us at Achouffe about their beer labeled 666 not being allowed in the US. I agree with our friend of Faith, what the fuck?