Today in New Albany, local Democrats (predictably minus the city council’s tired and increasingly redundant Gang of Four), filled the City-County Building’s 3rd floor meeting room for a punctual noontime appearance by Baron Hill, who vowed to do what it takes to regain the congressional seat he lost to Mike “The Mustache” Sodrel in 2004. 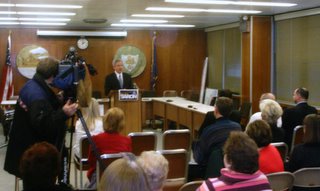 It was the third of four stops for Hill during a two-day opening blitz of the 9th District, and his remarks were similar to those he made in Bloomington yesterday, as reported here: 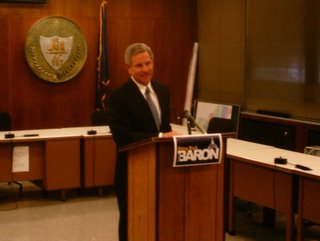 During question and answer time, NA Confidential asked Hill how he plans to remain on task with a promised campaign of issues while on the receiving end of what is expected to be a ceaseless negative campaign bombardment financed by Sodrel’s nationally funded, right-wing GOP sycophants – a phenomenon that assisted in Hill’s downfall in the 2004 election.

“I’m going to be aggressive,” he replied to spontaneous and sustained applause. 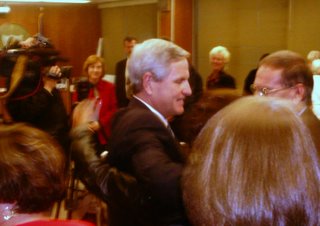 Let's hope that Baron Hill follows through on this promise. The 9th District does not need a representative who "votes with Tom DeLay 99% of the time."

Great time for the ex guard of the Seymour Owls basketball team to make a comeback. The GOP is feeling the heat from the top down; better known during the Reagan years as trickle down. Downside is the "warchest" of green backs that Sodrel has to throw mud and influence with the local media, less the 18 wheeler billboard ads that the government mail contracts help pay for.
Darn, did I say that. TOO BAD.

Go Baron Hill, Mike Sodrel is a desroyer of mother earth. Wonder if the so called democrats who back white chili valla will vote for Baron Hill.