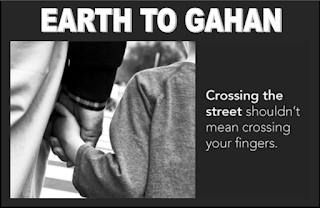 To live in New Albany is to know that the default state of our prevailing Gahanist governing doctrine is a self-congratulatory, closed circle, as designed to retain information, enhance monetization and and exclude prying eyes.

It is very likely that we'll never hear any more about this pedestrian "accident," unless the mayor (he says he's a Democrat) can devise a way to use it against the police union.

First and foremost, that's because Jeff Gahan has no intention of being out in front and leading on the issue of the streets. He has not led for the past 1,438 days. He's not going to start now.

Fear and stubbornness play significant parts in Gahan's do-nothing calculus, but it goes deeper than these recurring handicaps. Jeff Speck's street grid fixes are examples of thinking urban, like a city. Gahan thinks like a suburb. His entire political career has reflected the sprawl-driven logic of the cul-de-sac.

I might as well ask one of my cats to devise a few algorithms before tuna.

Of course, I hope I'm wrong. Unfortunately, this one isn't a breath-holder.

On Wednesday, December 2, New Albany Police Department (NAPD) Officer Michelle Gilbert struck Tenille Splunge while she was crossing the street, leaving her with minor injuries. The on-duty officer was driving a 2012 Chevrolet Equinox and turning from Elm Street onto State Street. Splunge was taken to the hospital.

The incident was reported by the N&T, NA Confidential, the C-J, WAVE3, and WHAS11.

Pedestrian struck by police vehicle, and more accidents like this waiting to happen in wrong-way New Albany.
Posted by The New Albanian at 12/09/2015 08:30:00 AM