Throughout the municipal election cycle of 2015, Pavlov's mutt was roused on numerous occasions.

Team Gahan's opponents would point to the mayor's perennial and secretive non-transparency, and both the mayor and his acolytes would deny it. Had Bob Dylan resided in New Albany, it would have been called "Saliva on the Tracks."

The election is over, and Jeff Gahan won. There is a final city council meeting on the schedule this Thursday evening, complete with an ordinance about rental registration and enforcement, and resolution shifting monies previously allocated for a lighting project to an as-yet undefined WiFi installation.

Needless to say, these issues were skirted throughout the year ... until now.


On Monday, at city attorney Shane "Thesaurus-Free" Gibson's request, the city clerk e-mailed the rental housing "exhibit" to council mailing list recipients. It runs 31 pages and is unusable as a .pdf file. Here are the contents headings: 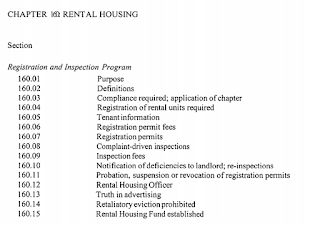 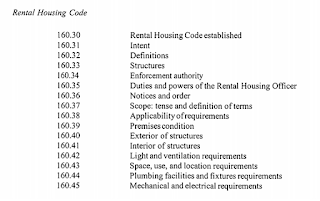 These might be good developments, and I'd love to be able to provide readers with better background on these matters, but there is little I can do for now. Most of my recent questions to my own city council person go unanswered, and both City Hall and the local Democratic Party have spent the past nine months depicting me as a non-person.

No complaints: Live by the sword, die by scorched earth. I get it. That's life under the occupation, and why the resistance moves underground.

If New Albany had a newspaper, perhaps it might ask these questions. It will not, so I must defer to you, the readers. If you live in New Albany and care about these issues, ask your council person to explain them. Ask Team Gahan to explain them. It's too easy for the functionaries to shut down one voice, so please, at least make them break a sweat.

I'll continue doing what I do, as I'm able. But I need help.

Look: New Gahania is by no means a monolith. 53% of 28% of the city's registered voters opted for Oz. That's roughly 10% of the population as a whole. Jeff Gahan's bizarre cult of personality surely remains ascendant, though it isn't infallible, even if he's been unable to concede a mistake in 12 years.

Well I am shocked by this and hope others are too. I will be there!