When Team Gahan's most recent handicapped-user initiatives turn out looking like this ... 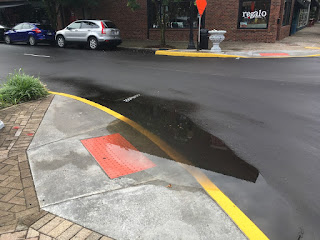 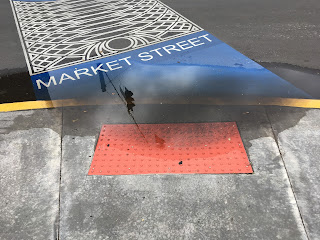 ... and all the operatives can do is express public confusion over potential repair options ...

There are at least two types of water parks in New Albany: TIF-tastic Showplaces and Inadvertent Crosswalk Meltdowns.

The Board of Public Works and Safety's Mickey Thompson was on hand Monday night to explain that it's all the fault of ADA requirements for handicapped-accessible ramps, and he isn't sure what can be done to correct it. And yet as it pertains to troubled drivers, no stone is left unturned to facilitate passage of automobiles.


... it's no surprise to learn the functionaries are on notice to refrain from acknowledging any questions as yet not subjected to formal study in the form of a lucrative contract with HWC Engineering. It's not Red Tape, it's Red Alert -- and you can expect a reply in a year or so, though only when Jeff Gahan is prepared to "present" it.

A group wants to make a New Albany pa‍rk a place for handicapped children to play, by Elizabeth Beilman

NEW ALBANY — A local civic organization is hoping to transform a New Albany park into a place designed with handicapped children and adults in mind.

The Falls Cities Sertoma Club, a local chapter of nationwide nonprofit that preaches "service to mankind," hopes to work with the New Albany Parks and Recreation Department to renovate Sertoma Park.

The 6-acre park located on Mills Lane is mostly greenspace but has a small playground on mulch, a shelter house, a volleyball net and a basketball court.

The local Sertoma Club has chosen this park — named after their group because of their donations in the 1970s — for its vision.

A request to interview the city's parks director sent Monday to the New Albany city operations spokesman was unanswered.


Can someone wake up the editorial board? There's a persistent pattern here, and the reporters see it, though Jeff Gahan's paranoia probably pales in comparison with City Hall's advertising expenditures.
Posted by The New Albanian at 11/13/2017 09:00:00 AM