LIVE TO EAT: My profiles of Akasha Brewing Company and Waylon's Feed & Firewater are included in the newly released Winter 2017 issue of Food & Dining Magazine. 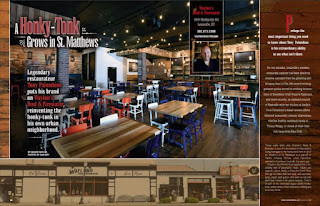 The Winter 2017 (Nov/Dec/Jan) issue of Food & Dining Magazine is out, and I have two articles in this edition, which I believe is a first for me. You can read them at issuu.

"A Honky Tonk Grows in St. Matthews" is a featured restaurant profile of Tony Palombino's latest concept, which brings him full circle, back into his own neighborhood.

Palombino should know about local demographics. He grew up on Willis Avenue and graduated from Trinity High School, both situated within minutes of the present Waylon’s location.

“Is Waylon’s the place where I want to drink beer out of a plastic cup? No, that’s not what this place is,” Palombino said.

“This is where you, me and the wives can listen to some great live music, have some great food with decent pricing; maybe throw some brunch in there.” 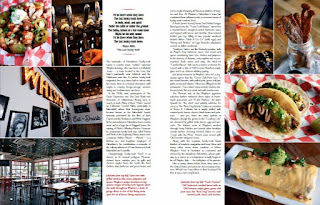 I had the good fortune to be there at Waylon's on a Sunday morning when photographer extraordinaire Dan Dry captured the eatery on film. Look up the word "craftsman" in the dictionary, and you'll find a picture of Dan. 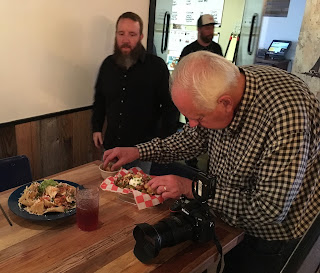 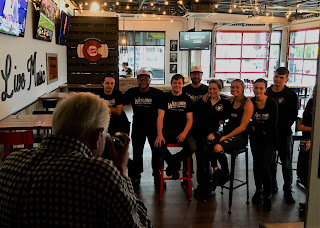 For the current issue, John also commissioned a beer column. This one's about Akasha Brewing Company in NuLu.

Akasha is designed to be a production brewery. While there are no cans or bottles at present, kegs travel to outside accounts via Dauntless Distributing in Kentucky and Starlight Distribution in Indiana.

However, beer lovers are invited to stop by Akasha’s dog-friendly taproom for pints and samplers, carry-out growlers and the occasional game of Monopoly. Apart from packaged snacks, no food is served at the taproom; however, this being NuLu, sustenance is always quite near. 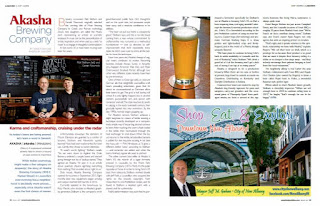 I hope readers enjoy these profiles, which will be reprinted here in text format once the next issue of Food & Dining (Spring 2018) is released in February.

Currently I'm working on two submissions for the next issue: A feature-length exploration of the exploding restaurant and bar scene in Jeffersonville, and an overview of Louisville's dozen-plus breweries.
Posted by The New Albanian at 11/20/2017 07:12:00 PM