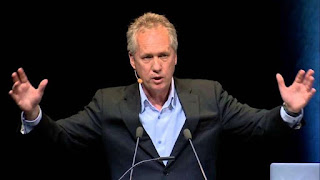 Try to imagine another major American sports writer saying this:

Our love of sports laid the groundwork for the madness of "lotteryism." We’re the frog in the slowly boiling water. And they are not content merely to cook us. We’re also their dinner.


And, as the ever-masterful Zirin notes in this essay, "lotteryism (is) little more than corporate theft, in collusion with often Democratic Party–led governments."

You think it's possible that Trump is turning up the vile racism at precisely this moment to push through a tax bill that benefits the 1% so we fight each other while he robs us blind?


Think so? It seems to be working, isn't it?

The terrific podcast Citations Needed, hosted by Nima Shirazi and Adam Johnson, call it “lotteryism”—the grotesque process where local and state governments bid for Fortune 500 companies by offering billions of dollars in tax breaks in the hopes that they will relocate to their cities. The most high-profile example of this right now is, of course, Amazon. Politicians across the country are offering absurd packages to attract the new “Amazon HQ2” headquarters. These enticements will gut services for those who depend on public schools, hospitals, public transportation, and basic infrastructure. This is not to say that Amazon won’t bring jobs to these cities. It is making promises of thousands of permanent hires. But the pound of flesh being offered for these jobs is frightening.

Chicago has said Amazon could keep employees’ income tax, a total estimated at $1.32 billion, according to the Seattle publication The Stranger. New Jersey has offered a staggering $7 billion dollars in tax breaks. Boston has offered to have city employees be privatized workers when doing work under the auspices of Jeff Bezos’s empire: his own army of the underclass. Southern California is offering $100 million in free land. Fresno is offering to “place 85 percent of every tax dollar generated by Amazon into a so-called ‘Amazon Community Fund.’” This would give Amazon control over where our taxes flow, which undoubtedly would be in the direction of its own well-compensated employees—think parks, bike lanes, condo development—creating a new model of gentrification, directly subsidized by the traffic tickets and meters and regressive taxation of the poor.

Fresno’s economic development director Larry Westerlund told the Los Angeles Times, “Rather than the money disappearing into a civic black hole, Amazon would have a say on where it will go. Not for the fire department on the fringe of town, but to enhance their own investment in Fresno.” Sure would suck to have your home on fire if you live on the “fringe of town.”

This is little more than corporate theft, in collusion with often Democratic Party–led governments. And publicly funded sports stadium scams and Olympic bidding wars laid the groundwork for it. They have normalized the idea that our tax dollars exist to fund the projects of the wealthy, with benefits trickling down in ways that only produce more thirst ...