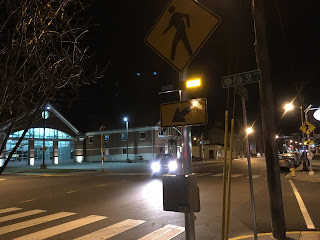 They've been called "enhanced" crosswalks and "high visibility" crosswalks. They're a prominent feature of downtown New Albany's new two-way street (or is it "road"?) grid.

In the following announcement from the University of Virginia, crosswalk safety remains entirely about the pedestrian, who must "use" these mechanisms correctly in the faith-driven hope that drivers might understand their own responsibilities to share the patch.

Not everyone pushes the button.

But how many drivers are paying attention?

How many know what this means?

... “Rapid Flashing Beacons allow the University to put more lights in more locations across Grounds in ways that are less invasive, easier to maintain, and less disruptive to traffic. Most importantly, RFBs are very reliable. All of this points to increased pedestrian safety if used correctly,” said Director of Safety and Emergency Preparedness Marge Sidebottom.

Because these lights are above ground at approximately eye level, it’s easy for pedestrians to check that lights are flashing before entering the crosswalk. Drivers should be aware that flashing lights means that a pedestrian is near. Unfortunately, though, not everyone pushes the button.

“The key to safety is that pedestrians must activate the lights,” Sidebottom said. “Studies have shown that the rapid flashing lights are effective in getting drivers' attention, but pedestrians need to push the button. Then, they need make sure that cars have stopped before entering the road. Pedestrians always face the greatest danger in a run-in with a car, regardless of who has the legal right-of-way.”


This passage might have been written by HWC Engineering, hence the sad reality of the imperfect implementation of two-way roads (are they streets?) in New Albany.

That's because as a non-automotive user of the city streets, I've found these credit-card-sized flashing beacons to be complete and utter jokes.

People walking still will find it far safer to look both ways and cross in the middle of a block; in spite of claims that traffic is moving more slowly since the reversion, the fact is that far too few calming measures were built into the rebooted grid. Team Gahan bet the farm that "friction" alone would calm traffic sufficiently for the myriad other two-way benefits to emerge.

Maybe, though these streets are still straightaways, just like before. They're still built to promote speed and indifference, just like before, though now with "enhanced" crosswalk beacons intended not as a legitimate means of rectifying a root problem, but as a "hey, we did something" gesture, another bright, shiny paste-over symbol, this one pointing to how the fundamental mobility issues downtown have not been addressed at all by a "modernization" program that preserved (certainly on purpose) the downtown grid as composed of "complete roads" rather than altered into "complete streets."

Charles Marohn nails the explanation of this difference in a six-year-old post from Strong Towns. It is published here in its entirety. Jeff Gahan made sausage out of Jeff Speck's prime proposals by handing them to HWC Engineering, and HWC Engineering co-opted it in precisely the fashion described by Marohn.

Speck understood the transformative nature of a genuine complete street. Gahan feared it.

The Complete Streets concept is one that is long overdue. We've spent two generations transforming a public realm once comprised of walkable, mixed-use neighborhoods into auto-only zones. These are places where the kids used to play ball in the street. Today a kid can't even play safely in their own front yard.

At Strong Towns, we've worked to illuminate the fact that this transformation has been done at tremendous financial cost. This is not only because the construction of wider, flatter and straighter streets has been expensive, but because the auto-centric nature of the transformed public realm drives private-sector investment out of traditional neighborhoods, dislocating it to places that provide more buffering to the car.

Not only that, but the redevelopment that has happened in these neighborhoods has largely been on a suburban framework, using the parking ratios, setbacks and coverage restrictions of modern zoning to reduce density (and the rate of return). Financially, these places are largely insolvent, lacking the tax base to maintain their basic infrastructure.

Enter the concept of a Complete Street. To me, the fundamental contribution of Complete Streets to the discourse surrounding the future of our towns and neighborhoods is the recognition that our streets must serve more than just cars and that the public realm can no longer be an auto-only zone. The fact that the Complete Streets model has broken the stranglehold that the auto-only design mentality has had on our streets should be the cause of unending rejoice.

In March I was able to have dinner with Kaid Benfield. During the course of our conversation, he enlightened me on how the Leadership in Energy and Environmental Design (LEED) standards were tweaked with Neighborhood Design principles. The result, LEED-ND, takes a great concept -- buildings that are energy efficient and environmentally friendly -- and overlays it on a development framework that reinforces these principles. In other words, no more "green" buildings in the middle of a greenfield, with 30 mile commutes each way.

In a similar vein, we're going to now, humbly, suggest a way in which the Complete Streets concept can evolve to achieve what I believe is its principle intent, that being Complete Neighborhoods.

I've now seen two projects where engineers promoted the use of "complete streets". In each I see the engineering profession co-opting the Complete Streets moniker without any thought to a Complete Neighborhood. For the engineers on these projects, the approach remains the same. I'll quote from our piece, Confessions of a Recovering Engineer:

An engineer designing a street or road prioritizes the world in this way, no matter how they are instructed:

The rest of the world generally would prioritize things differently, as follows:

In other words, the engineer first assumes that all traffic must travel at speed. Given that speed, all roads and streets are then designed to handle a projected volume. Once those parameters are set, only then does an engineer look at mitigating for safety and, finally, how to reduce the overall cost (which at that point is nearly always ridiculously expensive).

One of the places I've seen Complete Streets applied is My Hometown's Last Great Old Economy Project (also known as the College Drive project). In this instance, the design starts with a minimum design speed and a projected traffic volume, the latter being the stated impetus for the project. This analysis provides us with four lanes of fast-moving traffic. The engineers then move on to the "safety" criteria and the mandate that -- if we can afford it -- we accommodate bikes and pedestrians. This is done, of course, at tremendous cost - estimated at over $7 million for a mile of road.

Now notice that I called this route a "road" and not a "street". Understanding the difference between a road and a street is critical to understanding the problem we have with engineers misusing the Complete Streets approach. From our Placemaking Principles for a Strong Town:

Roads move cars at high speeds. Streets move cars at very slow speeds. We should build roads outside of neighborhoods, connecting communities across distances. We should build streets within neighborhoods where there are homes, businesses and other destinations. The auto-road is a post-WW II replacement of the rail-road. The street should be what it has always been; the street.

The fundamental design flaw of the post WW II development pattern -- the false premise upon which every other design tragedy has been committed -- is the transformation of our streets into roads.

High speed auto travel has no place in urban areas where the cost of development demands a complex neighborhood pattern with a mixing of uses, multiple modes of travel and a public realm that enhances the value of the adjacent properties. High speed traffic destroys value in our neighborhoods. It drives out investment. There is no amount of pedestrian enhancement that we can build to offset the negative response people have to being in the close proximity of speeding traffic.

If there is one thing our current financial situation should teach us about the engineering profession it is this: engineers will bankrupt us if given the chance to build our cities and towns the way they envision them. It is predictable that the engineering profession will embrace the concept of a Complete Road -- which is nothing more than a bad design made PC by throwing an expensive bone to bikers and pedestrians -- because it fits with their hierarchy of values (speed, volume, safety and then cost). Insidiously, promoting Complete Roads will ensure them more funding than they would otherwise receive. You can call them "streets" all you want - unchecked, they are going to build "roads". (For example, check out the 14-foot highway lane widths on the Complete "Street" cross section on My Hometown's Last Great Old Economy Project).

We love Complete Streets. They are essential to a Strong Town. Let's get out there and build them, but make sure the engineers don't con you into a Complete Road. Demand slow cars and a Complete Neighborhood to go along with your Complete Street.