Chatting on Fb about the street grid in NA: "The push to start reclaiming some of our streets and spaces for users and uses other than cars isn't a radical change." 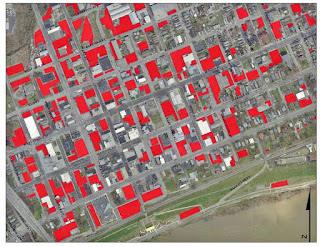 My friend and colleague Jeff Gillenwater posted the following to New Albany Indiana, a Facebook group that functions somewhat like the discussion groups of old. Italics are the omniscient narrator (that's Roger), with Jeff's comments in normal font. He begins by explaining a photo we use often at NAC.

This overhead view of Downtown New Albany was created several years ago by Josh Poe, then an urban planning graduate student and New Albany resident. Everything in red is off-street automobile parking. With the exception of the parking garage on the corner of State and Market, it's all surface parking (and, of course, doesn't include all the on-street parking that's readily available.) Given how much more densely developed the city used to be, commercial buildings and/or houses were torn down in most cases to create those parking lots. The next time someone tries to tell you New Albany hasn't done enough to accommodate cars, feel free to share. The push to start reclaiming some of our streets and spaces for users and uses other than cars isn't a radical change. It's a response to and corrective for the past few decades of radical change that has already happened.

Also worth noting, here's what was demolished to create the parking lot that eventually became Bicentennial Park. 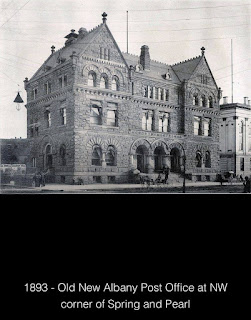 And the bank and mostly parking next door. 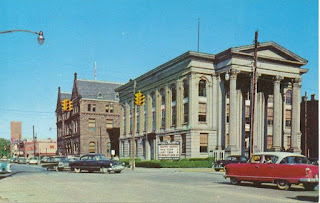 Here is a PDF showing a few hundred parking spots in downtown New Albany; publicly owned and free after 5 pm and on weekends.

It seemed to one reader that such comments about auto-centrism were designed to discourage auto use downtown, thus defeating the purpose of revitalization by implementing a "European model" to serve the needs of the few, not the many.

People very invested in defending automobile centric culture are, whether they realize it or not or mean to or not, are speaking from a position of significant privilege. Though New Albany, like a lot of other older U.S. cities, was initially designed for multimodal street usage, most of our infrastructure spending has been aimed squarely at automobiles at the expense of other forms of travel for the past few decades. That's actually a short time in our overall history, but has been true for just long enough now that people don't remember it being any other way. Thus, they tend to see calls for more equity between various forms of transportation and any talk of curtailing automobile dominance as demonizing cars and car drivers. What the posts actually do is point out that it's not always been that way. If we could decide to change it fifty or sixty years ago, we can decide to change it now. Realizing what we've given up, what we've lost and are still losing in the process of converting to automobile dominance, is a first step in deciding to pursue change.

As for the "European model" in a pejorative sense ...

New Albany was built by European immigrants on a European model. That's how it was designed to properly function (and functioned well, for 150 or more years. Over and over again for years people have provided links to research, case studies, and successful approaches that have pointed directly to greater overall public good via what you call a European model. That some folks simply choose to not acknowledge that doesn't make the people sharing that information a narrow interest group. If you can show how automobile centric models have proven to be better for us in terms of fiscal responsibility, public health, and environmental wellbeing, I'm all ears (or eyes, as relevant).

Another reader asked whether it is possible to have a vibrant urban area without "cheap" parking on abundant surface lots. Parking garages like the one we used in Chicago last week weren't mentioned.

One of the more interesting aspects of the "hard to park" scenario has to do with perception. People often walk farther from their parking spots and back to their cars at WalMart than they do downtown, but will still insist that WalMart has close-in parking and downtown doesn't. Try to suggest that the environment in which people are asked to walk has something to do with it, though, and ...

It really is a trip how quickly downtown parking perceptions changed. When my mom got married, she moved from the west end of New Albany... all the way to Sellersburg. LOL. When I was a kid, we still came to downtown New Albany all the time. In the 70s and early 80s, a lot of the older stores were still here. We never expected, even at that late date, being able to park directly in front of a place most of the time. I mean, you might get lucky and something would open up along the way, but we mostly just went straight to the parking garage (formerly located next to what's now Big Four Burgers) and assumed we'd have to walk a few blocks to the places we were going. Now, to hear some folks talk about it, parking on Bank Street to go to a place on Pearl is some sort of inordinate hardship. Oddly enough, a lot of those same people don't think twice about parking in the middle of the Meijer parking lot and walking quite a bit farther to the department they actually need, to the checkout counter, and then back to the car. It might have something to do with the environment in which the walk is occurring.

I mentioned out having just returned from Chicago, where people regularly pay outlandish prices to park downtown. For the record, we parked the car in a garage for four days ($122) and bought two three-day CTA transit passes for $20 each. One reader rightfully pointed to the absence of these transit options in New Albany.

At one point in their respective histories, the Southern Indiana/Louisville metro area rivaled Chicago in transit development. It's one of the things that gives me a chuckle when some folks refer to New Albany's automobile-centered heritage. It just ain't so.

Passenger Rail The Way It Used To Be

The point in sharing examples from other places and comparative histories isn't to say that those places are the same or should be. More than anything, the idea is that places can change themselves and what they emphasize or value and have many times over, New Albany included. Per the original Chicago reference about parking, people pay a lot to park in Chicago because (Rahm's privatization scheme aside for a moment) they think it's worth it to be there. That's a very scalable concept. Funny aside: I deal with Chicagoans pretty regularly now at work, including getting them parked sometimes. When I tell them all-day parking is $6, they laugh at me like I told them a really good joke.

In advocating two-way streets and other components of urban street grid reform, we've always referenced research and experience. We've pointed to successful reforms in other cities, and not just in Europe. I've come to expect a specific rebuttal, which constitutes a form of exceptionalism: "But New Albany is different. Biology and gravity might work the same here, but not street grids."

For a lot of Americans, merely pointing out that a concept came from elsewhere is the equivalent of saying it's obviously wrong. Beyond that, it's often a matter of insisting that WE have always been one way and THEY have always been another. Like "scalable", that applies to a lot more than parking and cars, too. In all seriousness, privilege and the language and power dynamics of privilege are always a big part of conversations around cars and other street users. You can swap out the "we" and " they" parts and a lot the arguments are so similar to other social issues that involve a majority addressing a minority that they're nearly interchangeable on a linguistic level.

Unfortunately, no one ever said learning was easy. Ten years ago, I understood very little of this. Now I understand more, and if a slow learner like me can do it -- so can anyone.
Posted by The New Albanian at 7/09/2017 10:37:00 AM

Perhaps one of your most important posts in the 13 years of NAC.