Mike Pence: "The effect is that of an unctuous church elder selling pyramid schemes to credulous parishioners, never doubting he is doing God’s work." 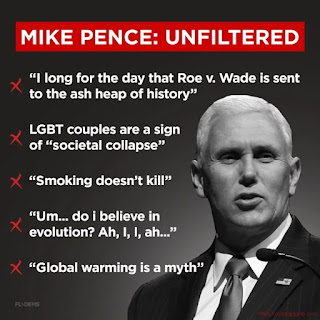 As a lifelong Hoosier, I'm compelled to warn those of you currently existing on an steady diet of "Impeach Trump" that waiting in the wings is someone far worse, primarily because Mike Pence actually believes the religious mumbo-jumbo to which The Donald pays only bored lip service.

Three entertaining pieces follow. Many thanks to my friend C for these links; his eye for the polemic remains exemplary.

Leading off, why none of Pence's three simple identities qualifies him to be dogcatcher, much less chief executive.


Mike Pence: The servile schemer who would be president, by Richard North Patterson (Boston Globe)

ON THE EVIDENCE of a lifetime, America’s vice president is not a complex man. Instead he is three extremely simple ones: an incompetent ideologue, an obsequious toady, and a self-serving schemer.


As a side note, Patterson offers what is my single favorite paragraph of the year to date, which might be only slightly refashioned to describe Deaf Gahan and his stuffed board of toady housing bootlickers.

It was utterly in character, then, when Pence kicked off the most excruciating display of synchronized sycophancy in memory — the chorus of praise from cabinet members upon their first meeting with America’s Dear Leader.


Awesome. Patterson covers older ground in this column from April.

Mike Pence and the rise of mediocrity (Patterson; Globe)

(Pence's) public persona reeks of smarmy sanctimony — every untruth, evasion, and vacuous bromide delivered in a portentous pipe organ voice accompanied by squints, nods, and shakes of the head which, Pence clearly imagines, convey a pious gravity. The effect is that of an unctuous church elder selling pyramid schemes to credulous parishioners, never doubting he is doing God’s work. Every self-serving self-deception reveals the depths of his shallowness, the breadth of his hypocrisy.

His salvation is not ours.


Indeed. Finally, to end on a deeper and more prosaic note:

Vice President Mike Pence stays loyal to Trump, but it could come at a cost, by Noah Bierman (LA Times)

The Republicans’ signature healthcare bill was in peril in Congress and President Trump was busy warring against media foes on Twitter.

Vice President Mike Pence, wearing a brown suit and his usual earnest expression, was far from the fray last week, here at a warehouse outside Cleveland amid metal rods and wooden crates for a “listening session” with small-business owners. Sitting at a drafting table, he ignored the camera lights as well as the trouble in Washington, dutifully hearing out complaints about healthcare, taking notes on a legal pad and promising the Ohioans that the Trump-Pence administration was close to replacing Obamacare.

This is how Mike Pence copes with the drama that defines life as Donald Trump’s sidekick: acting as though everything is normal, boringly normal.