30 years ago today: Both Auschwitz and Lanzmann's Shoah. 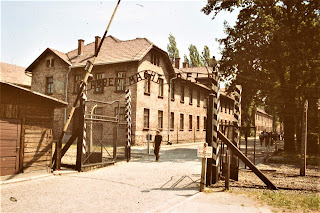 Previously: 30 years ago today: Our dinner with Andrej on a surreal evening in Krakow.

Apart from being unpronounceable at first glance, the Polish city of Oświęcim seems innocuous enough, until you realize that it's known to the world by its German name, Auschwitz.

To tell this story, I've gone back into the archives and extracted two previous testimonials, joined together here as one, and edited for clarity.

I'm surprised to learn that Claude Lanzmann is still with us, but he is, at the ripe age of 91. In 2012, the English translation of his 2009 autobiography was published, and inside there is a revelation explaining why this elderly Frenchman is so important in explaining the legacy of Auschwitz and death camps like it.

The Israeli Ministry of Foreign Affairs approached Claude Lanzmann in 1973 and suggested that, with Israel’s backing, he make a documentary film about the murder of the European Jews.


When I'm asked to reveal my "favorite" film, it's always difficult for me to answer. Do documentaries count? If so, how can a work as grueling as Lanzmann's Shoah be considered as "favored" in the intended context of pleasurable entertainment?

Ask me the most "influential" film of my life, and the answer is easier. In retrospect, my initial viewing of Shoah in 1988 was the culmination of a free-lance, post-graduate education.

I was the cliched sponge, voraciously soaking up books and documentaries about European history, culture and any related matters in an effort to achieve greater understanding during periods of continental travel.

Lanzmann's relentless imagery has been with me ever since. Living memories then are academic memories now, making remembrance in whatever form even more imperative.

My last viewing of Lanzmann’s 1985 documentary film Shoah came in 2006, via DVD. It is an oral history of the Holocaust that runs almost ten hours and demands an effort on the part of the viewer that goes somewhat beyond that required to indulge the pablum of the typical Hollywood blockbuster.

However, I first saw Shoah in its entirety in the early spring of 1988, a year or more after videotaping it from public television. For ten solid ten days, I set the alarm an hour early each morning and made my way through the film in bits, pieces and chunks before heading off to work.

While not particularly enjoyable in the conventional sense of entertainment, the Shoah documentary experience has proven visceral as well as essential for my understanding of the Holocaust. It is an unconventional, brutally effective documentary that depicts and describes historical events without the use of archival footage or reenactments.

During the 1970’s, Lanzmann began filming real people – Jewish survivors, serenely acquiescent Poles and even (surreptitiously) an unrepentant SS officer – all of whom had lived through cataclysmic and unspeakably horrible events that primarily took place in areas of dense pre-war Jewish population, which during the Nazi occupation became dotted with planned centers of systematic slaughter.

These memories and recollections were filmed in a dozen or more then-Communist locales in Poland and Eastern Europe, with occasional side excursions to Israel, Germany and elsewhere in the world in conformity with the post-war diaspora of victims (and perpetrators).

The film was organized into stories woven together with consummate skill, and as the hours pass, there is an emotional crescendo guaranteed to leave the viewer both drained and fearing for the future of humanity. It’s true that we manage somehow to survive. It’s unclear how we manage to do it.

At the time Shoah was released, its director was fiercely criticized for including footage that unflinchingly exposed lingering anti-Semite tendencies on the part of ethnic Poles, this coming at a time when Poland – through the activities of the Solidarity trade union movement and a sitting Pope – was being lionized by anti-Communists throughout the world as the best extant hope to commence the toppling of the Bloc’s socialist dominoes.

I’d studied the Holocaust in college and devoured Abba Eban’s Heritage: Civilization and the Jews PBS series. As a philosophy major, debates pertaining to the ethical culpability of ordinary Germans in atrocities committed during the war were certainly familiar to me – but when I watched Shoah in early 1988, it had been only a few months since my first trip through Poland.

This fact made for uncomfortable mornings in front of the tube.

In 1987, I was in Krakow, Poland with my friend Barrie (who’s now a Scribner Middle School history teacher) and two fellow travelers from Florida. We’d taken an unscheduled detour from the Soviet/Baltic/Poland youth and student package tour by hopping a Friday afternoon train from Warsaw, an experience that taught us the dubious (and embarrassing) value of handing the conductor $5 cash and watching him evict people from their seats to make room for us.

We rationalized: It was the system to blame.

On a Saturday morning, after overnighting in Krakow for $2.50 each in a pensioner’s shabby flat, we rustled a few grams of greasy salami and bread, then found the dingy bus station in the city’s crumbling and neglected downtown, joining several dozen Polish weekend trippers on a bumpy, grinding, two-hour SRO journey to Auschwitz.

There were no English speakers around to help, but we managed to guess the correct stop near the entrance to the museum and memorial. Once there, we paid a fee and wordlessly passed through the numbing exhibits inside the old brick barracks buildings of Auschwitz 1, a strangely bureaucratic and tidy introduction to the supreme horror a few hundred meters away at Birkenau, the epicenter of the assembly line death camp.

You’ve probably read or heard about the rooms filled with abandoned luggage, eye glasses, artificial limbs, shoes, children’s toys – all confiscated from prospective victims as they were paraded off cattle cars to perish within the gates that read, “Arbeit Macht Frei” … or, work will make you free.

Intense? Chilling? Insane? Yes, and so much worse than these and any other inadequate words that we have little choice except to pretend might encapsulate some measure of the emotion felt at a crime site with a scale of aspiration well beyond the imagination of a twenty-something Hoosier bumpkin.

After two hours, we’d had enough. To get back to Krakow – and return to Warsaw later that evening – necessitated a short walk into the center of Oświęcim, where we boarded a train that ran roughly half the distance back to the city before abruptly disgorging us to change at a rural crossing point.

The day had become hot and sultry, and activity at the station was minimal. There was a simple buffet offering plates of mystery meat in gray sauce, but we weren’t so much hungry as thirsty – not just thirsty, but fairly desperate for an adult beverage or three to ease the transition from wartime Auschwitz back to shabby 1980’s-vintage Poland.

Alas, there was no succor for the bibulous at the train station. Resigned to temperance, and waiting at the platform, there were green fields and crops visible in the distance beyond the tracks. Clean but roughly dressed people were walking in little groups toward the settlement – surely even in a Polish farm town there’d be something happening on Saturday night – and just before the train finally limped in, a horse-drawn cart clattered across the weathered cobblestones nearby.

I’d been looking at the older folks among the crowd. With memories of Auschwitz still raw, It’s obvious what I was thinking … and I kept those thoughts to myself.

Later, watching Shoah, the parched rail platform reverie and the native Poles populating it came back to me with a vengeance, and they wouldn’t let go throughout the remainder of the film over that period of days as Lanzmann meticulously peeled away the dusty layers of memory and forced the viewer to think: What did it all mean?

This is by no means a denunciation of Poland and the Poles, or an attempt at facile erudition with respect to their places in the historical record, only an observation that there are times when very little makes sense, especially when one’s own senses are being burdened with the unsettling melancholy of time.

Or, of time passed.

It has been more than forty years since Lanzmann’s film went into production, and all the survivors he chronicled are dead. The people I saw in Poland in 1987 are thirty years older, and many of them have passed on, too.

While I am reasonably confident that the readers of this blog need not be reminded of what the Holocaust meant, to be honest, I’m not so sure when I look out the window of my office toward the rental properties lining the other side of the street – or toward the streets in parts of Europe where anti-Semitism persists in spite of what happened there more than a half-century before.

Nature or nurture – or both? We’re classified as human by biological default at birth, but mustn’t we learn how to be human? If no one is there to teach us what it means to be human, or shirks the responsibility, aren’t we condemned to repeating these instances of man's inhumanity to man?

In 2006, a new translation of Elie Wiesel’s Night appeared on the paperback bestseller list. Wiesel died in 2016. Do you think either Donald Trump or Mike Pence has read it? 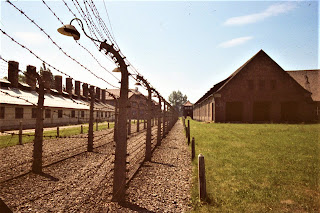