30 years ago today on THE BEER BEAT: Stouts galore in Cork, Kinsale and the Hibernian Bar, but in Ballinspittle, not so much.


Previously: ON THE AVENUES: Irish history with a musical chaser.

By my standards, surviving notes are positively florid.

I can't speak for the present time, but in far-off 1987, trains weren't tremendously useful in the Republic of Ireland.

Granted, they accepted Eurailpass, and this was occasionally helpful from a budgetary standpoint. However, too few passenger rail lines radiated out from Dublin -- not unlike spokes on half of a wagon wheel -- and they seldom were connected to each other in the hinterlands.

A network of reasonably frequent buses linked them, but buses weren't on the Eurailpass, and one was compelled to pay by the trip.

So, Barrie and I were at there at the O'Leary farm in Rosslare, bound for Cork, and we made it there at some point during the day on Tuesday, though how we managed it eludes me.

I've spent an hour trying to determine whether we took a train from Rosslare to Limerick via Waterford, then south to Cork, or a bus for some or all of this route. Operational passenger trains are fewer in number now, and while my gut tells me we rode the rails the entire way, I cannot be sure.

Cork, the Irish Republic's second largest city, lies on the island's southern coast. The city was the home of Tommy Barker, a good friend of my cousin Don's, who in 1987 was a reporter for the Cork Examiner newspaper. In fact, he's still there, 30 years later, more recently covering the property (real estate) beat.

(My guess is that real estate writers are a recent phenomenon in Ireland, given the country's great leap forward during the 1990s.)

Once in Cork, we made a beeline for the City Hostel, which was a tad ramshackle but had available space. Our bunk beds came perilously close to disintegrating when we first climbed into them (balsa does that), and the coin-operated shower's slot mechanism was hanging from the wall by wires that may or may not have been live.

When asked about this, the good-natured desk clerk merely shrugged. Nothing much was connected to electricity, he said. Just turn on the water and have at it, but it probably won't get hot -- and we could pay him for the shower if we felt like it, or not. 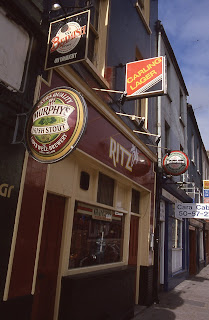 The great thing about Cork is that it had not one, but two of its own classic Irish Dry Stouts: Murphy's and Beamish. Sadly, they've long since ceased to be independent, but add the ubiquity of draft Guinness, and the city was a stout-lover's dream.

One bar we found had all three on tap at once. By contrast, there may have been two Guinness taps in all of Louisville at the time.

Don had tipped Tommy to expect one or both of us, and I called him at the newspaper. He suggested we meet at a pub called The Long Valley, and it went swimmingly. I remember having sandwiches there, and wondering if I'd ever be able to grasp what the older local bar flies were saying, in English -- such was the local accent.

I also recall being fascinated by out-in-the-open, legal bookmaking. Casinos hadn't yet come to Indiana in 1987. 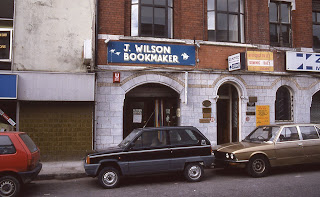 We'd already had at least two pints elsewhere on the way to the Long Valley, and after wrapping our session with Tommy, he made sure we found the drinking establishment both he and cousin Don had recommended: the Hibernian (Hi-B) Bar, which I wrote about earlier in 2017. 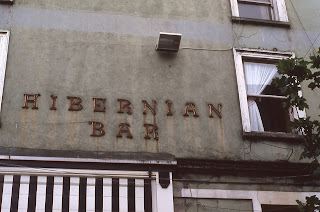 It was one floor up the stairs, with the restrooms halfway down a different set of steps.

THE BEER BEAT: The Hibernian (Hi-B) Bar, one of my favorite pubs in the world.

One of our temporary drinking buddies was a bearded and bedraggled veteran of Ireland's UN peacekeeping force of infantrymen force in Cyprus, circa 1970. When asked if he'd ever witnessed combat in the war between Greeks and Turks, he said no, not exactly; it had been his sensible expedient to turn and run whenever shooting broke out.


Somehow on Wednesday, we managed to shake off the lengthy Tuesday session and meet Tommy for a drive in his van to Kinsale, a town on the coast just 20 miles south from Cork. 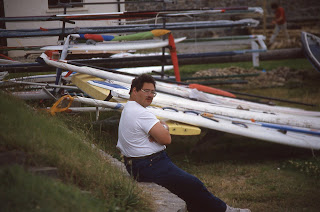 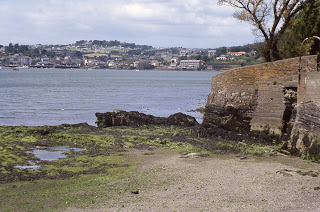 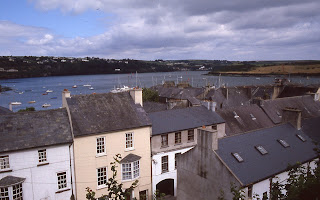 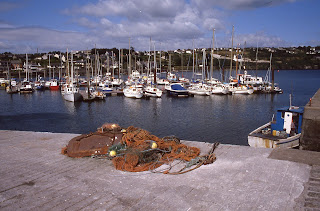 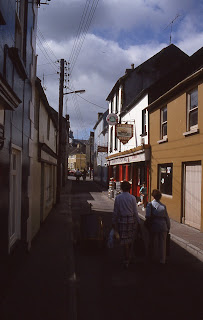 The Spaniard (above) and the Armada House (now Armada Bar) are still in operation. Here's the street view in 2011. 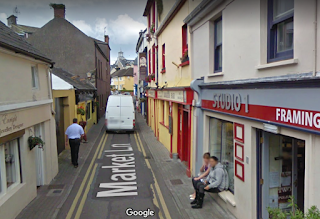 The names of these drinking establishments refer to the landing of the Spaniards at Kinsale in 1601, resulting in a siege and battle.

Tongue perhaps planted firmly in cheek, Tommy also saw to it that we absorbed the cultural attraction at Ballinspittle. It is a grotto with a back story. 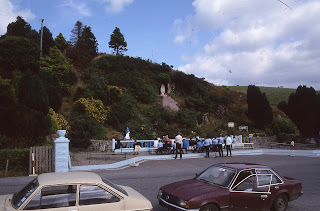 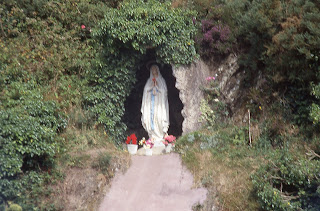 The explanation is here, in this period video.


On Thursday, Tommy returned to work and the Hoosiers embarked on a long walk through Cork, taking us to the university and hilly viewpoints to the southwest of the city center, and including the Beamish & Crawford brewery. There were no tours, but we were content to smell stout merrily cooking. 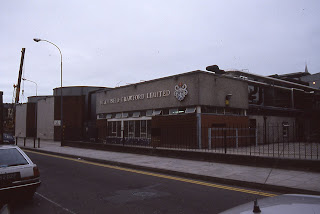 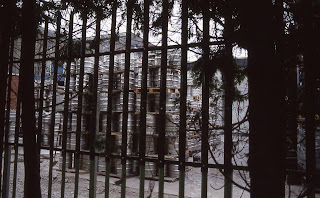 What is this overgrown thing? I've no idea, though I was a sucker for ruins. 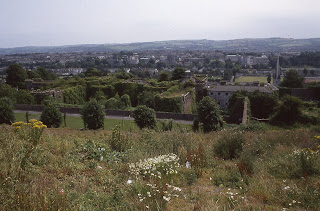 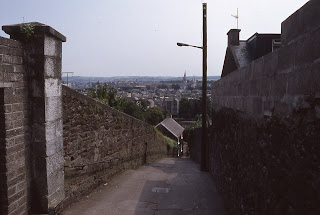 At the Long Valley on our first day in Cork, Tommy had confirmed what we'd seen on posters around town: U2 was playing a show on Saturday, August 8 at Páirc Uí Chaoimh, the football stadium on the east side of town.

He had to work and couldn't attend, but Barrie and I duly purchased tickets and commenced an itinerary scheme. We'd head out into the Irish countryside for a week, then circle back to Cork for the concert. Tommy magnanimously offered to let us stay at his cottage for a couple of days, then we'd move in the direction of Rosslare and a boat ride back to France.