Gahan's Public Housing Putsch: Free speech breaks out at the Chinese sparkler show, and Dear Leader is none too happy. 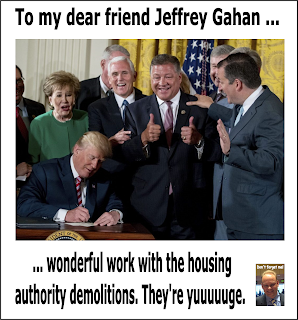 It was Deaf Gahan's signature showpiece event, that one special red, white and blue day each year when it's worth his time to feign interest in the amphitheater, and what happened?

You know, like in a free country or something.

In reality, these advocates were raining on Deaf's reign. He'll nurse this grudge until the end of time, won't he? Just wait until he sees the names.

With a newspaper reporter seemingly (at long last) intent to extract a quote from Gahan, the mayor unleashed a characteristic stream of poorly rehearsed bureaucratic prattle, surely spoon-fed to Deaf by his ever-doting party chairman.

"I have a lot of confidence in the newly appointed board, as well as the interim director, to produce a comprehensive plan to reveal to the public exactly how the transition will take place,” he said. “And I am confident that the new plan will vastly improve the living conditions for all residents.”

“I have a lot of confidence in the new board of trusted and lubed sycophants I appointed to return precisely the decision they were programmed to deliver, as well as the interim director who has absolutely no experience with any of it, though he sure needs the money, and I am confident that no subsidized luxury apartment will be left behind."


One can see Gahan's body language: a full frontal grimace, even as he recites the platitudes. Only one thing is missing, and that's sincerity, a quality utterly missing in Dear Leader's bountifully evasive game.

New Albany Housing Authority residents seek answers on housing plans, by Aprile Rickert (God Bless Ourselves, Over and Over)

NEW ALBANY — Residents of the New Albany Housing Authority have teamed up with an outside coalition in asking what the City's plans are for the future of public housing.

The coalition, which includes the Louisville/Southern Indiana chapter of the Democratic Socialists of America, Louisville Socialists and Hoosier Action, connected with residents about a month ago.

“We're trying to make sure the residents are being heard,” Josh Goodnewt, member of the Democratic Socialists of America, said.

The partnership comes after concerns from both residents of public housing and other community members, over a plan to overhaul housing that was approved by the NAHA board in April. That plan calls for approximately half the city's roughly 1,100 public housing units to be demolished over a period of time — some to be rebuilt, some existing ones to be renovated and housing vouchers to make up the difference.

But some residents are worried that there won't be enough affordable housing in the city to support the vouchers.