Previous: 30 years ago today: Springtime in Switzerland. First, a weekend in Lausanne.

Note that I began the trip in April and the 30-year narrative in May, so I'm looping back to catch up on the earlier portions.

At this late date, three decades after the fact, I'm at a loss to explain exactly why I went to Switzerland in 1987.

The stay was brief, but still comparatively expensive given the self-imposed budgetary constraints I'd established, and what's more, my original itinerary had foreseen a stay in Namur and the Ardennes in the Wallonian half of Belgium prior to revisiting Vienna in early May.

Paris put a crimp in my plans, and I changed everything around. It isn't clear why, and I'm left to ponder what might have been, seeing as eight years later I finally made it to Namur and environs, and it was epochal.

It took me almost as long to return to Switzerland, this excursion being Zurich in 1994. By then the pub business had been launched, and the sole purpose for going to Zurich was to tour the Hürlimann brewery, an atmospheric old-school operation and the conjurer of Samichlaus, now brewed in Austria since Hürlimann's unfortunate demise in the late 1990s.

The closest I can come to a coherent explanation is that I visited Switzerland to get the Alps out of my system.

As a child, and into my early teens, the primary objective of summer break Baylor family travel was to see the natural attractions of the American West. It was an obsession of my father's, and while there were occasional exceptions, the bulk of time spent away from home in my early years came in places like South Dakota, Wyoming and Montana.

It was real, and it was fun; no regrets, but it wasn't me. Forever the country boy raised to fish and hunt, my father had no use whatever for cities, and in all likelihood I was destined to follow one of two paths: either agree with him and advocate the great outdoors, or diverge completely and become an urbanite.

There probably wasn't going to be a middle ground, and the verdict for me should be clear.

I do enjoy natural settings, though preferably while seated on the veranda of a hotel with a nice beer in my hand. A bit of hiking is fine, just not overnight. A tent? Not my style. When beercycling came along in my forties, it was the closest I came to recapturing the woodsy vibe, albeit it riding along canals and roads in a European man-made built environment.

In this sense, Switzerland in 1987 was my kind of compromise at a time when I was still "finding" myself. There was gorgeous scenery, accompanied by plenty of railroads and verandas, with the main problem being the high expense. Gazing at the snow-capped peaks of the Swiss Alps would require absolute precision in terms of affordable lodging, and for once, everything fell into place.

My bunk in Lausanne was at an accredited international youth hostel, and after that, in Interlaken, there was space in a highly praised independent hostel.

Lausanne was good for a day, followed by day trips to Geneva and Montreux via rail and boat.

The Russian orthodox church in Geneva dates from 1866 and was financed by a member of the Russian royal family. I'd be seeing plenty more of these onion domes later in the summer, first in Yugoslavia, then in Bulgaria, and finally during the Soviet tour. 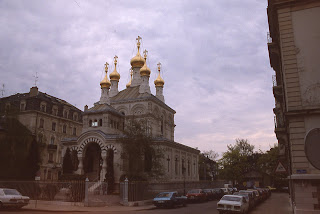 The (Protestant) Reformation Wall lies on the grounds of the University of Geneva, and is built into the city's old defense walls. Protestantism = Protestant work ethic = all those Swiss banks, army knives and cuckoo clocks. 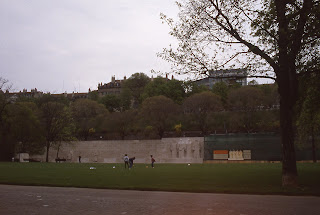 Louisvillians of a certain age will recall Barry Bingham Sr.'s ill-fated $2.6 million donation of a "Falls Fountain" to serve as St. Louis Gateway Arch-style welcome to the city. It was based on the fountain in Lake Geneva, which the Binghams had seen while in Europe.

The elder Bingham died just days before the Louisville version was inaugurated. There were major maintenance issues; it seems that no one had considered the vast difference between a debris-strewn river and a mountain lake. The Louisville Falls Fountain stumbled into 1998 with steadily escalating expenses, then was decommissioned, towed to a berth in New Albany, and eventually sold for scrap.

The one in Geneva was quite nice. 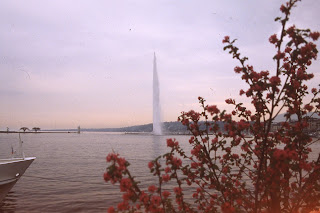 The second-largest United Nations office location is in Geneva, and I toured it. 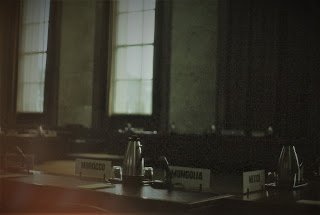 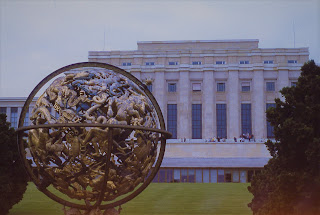 It appears that several of my photos from this roll were exposed to light. I probably opened the camera before the film was completely rewound. I've applied filters to try making them presentable. 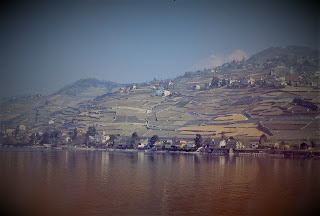 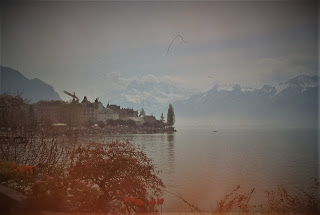 I remember nothing about my day trip to Montreux, apart from finding the casino to commemorate the inspiration for Deep Purple's "Smoke on the Water." The surviving photographic evidence suggests I rode the boat in one direction and the train back to Lausanne. 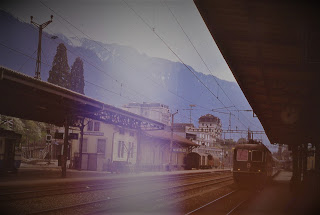 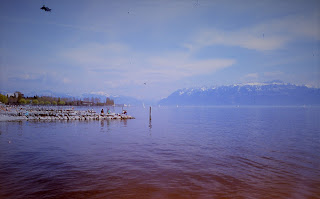 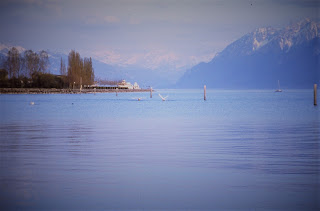