30 years ago today: Springtime in Switzerland. First, a weekend in Lausanne. 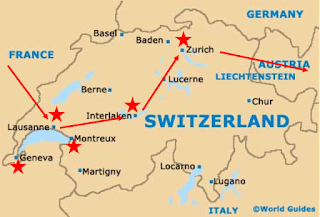 Previously (catching up on earlier installments): 30 years ago, April 20: Amsterdam amid the Heineken.

The word "disaster" evidently was supposed to remind me of something important, and my vague recollection supports that it had something to do with "scant accommodations."

In 1987, on a fast train, it would have taken about five and a half hours to ride from Amsterdam to Paris. I'd have arrived at Gare du Nord in early afternoon, much later than I preferred when it came to scoring inexpensive bunks, but since it was April, surely the competition wouldn't be fierce.

Au contraire. Amid the cobwebs, I remember that I was told by the folks at the budget bed booking agency that while Thursday night was possible, the entirety of hostel spots in all of Paris was booked during the coming weekend. It was a student spring break, or holiday, or some such.

I was annoyed, but accepted what was offered. Arriving at my building, I was asked if I'd share a two-bed room with a complete stranger, who turned out to be a young citizen of West Germany who spoke excellent English and told me stories about his experiences as a conscientious objector, doing alternative work in the countryside.

It had been my plan to remain in Paris for a few days, but this was looking improbable on a budget. Besides, I'd be coming back later in the summer with my friends Barrie Ottersbach and Bob Gunn.

First, strategic planning. A consultation with the Thomas Cook European Timetable showed that if I caught the TGV from Gare de Lyon a little after seven on Friday morning, I could be in Lausanne, Switzerland just after 11:00 a.m. Obviously, it was time for the mountains.

Second, it also was time to comparatively splurge on a stress-relieving meal with wine, and this meant navigating to Rue Xavier Privas and Yasmin, the North African joint cousin Don had introduced to me in 1985. There I ordered the basic tagine with bottomless couscous (pasta) and a liter of house red.

Later in the narrative, there'll be a bit more about the myriad joys of the couscouserie, but for now, know that I returned to the hostel feeling no pain, and found that my German roomie hadn't returned.

It was a gorgeous spring evening and the window had been left open, curtains parted. As I packed for an early Friday alarm, there was a sudden ruckus on the street, and seconds later a rock came through the window and skidded along the floor in front of me.

Off went the light as I sidled over to the window to see what was happening. There was a red-faced young Frenchman who seemed quite angry, and he was yelling in the general direction of our room, which was three floors up. Being drunk myself at the time, I surmised he was, too; the rock likely was a lucky heave, and it probably had to do with a girl -- which I wasn't.

Perhaps management would be interested in knowing, so I descended the stairs and began telling the story to the first person I saw near the desk, who listened for several seconds before reminding me he was an Irishman staying at the hostel, not working at it, but if I wanted to join him in going out and confronting the angry Frenchman, he was certainly up for the challenge.

There was a pause. I laughed, he laughed, and he reached behind him into a bag and produced a Kronenbourg: "Or, why don't we just stay right here and have a beer."

There were no more rocks in our room when I poured myself atop the sheets.

I made the train on time and arrived in Lausanne on what probably would have been considered an unseasonably warm and sunny day for April.

This typically prosperous Swiss city sits on the shore of Lake Geneva in the French-speaking part of Switzerland. There was an affordable hostel vacancy for the weekend, and relieved of my backpack, lunch beckoned. Owing to the sun, it simply had to be a picnic. I walked to the center, toward the lake.

I found a grocery and bought bread, meat, cheese and a six-pack of Cardinal lager beer, stuffed it all in my day pack, and made for what appeared to be a park area by the lake. Lots of other people had the same idea. It was midday, and many of them obviously were on lunch break. Some may have only worked the morning hours.

As I crossed the street, I was walking behind a shapely brunette. Sexism aside, at not quite 26 years old, you tend to notice these things.

She was dressed conservatively in a long, dark skirt and blouse, no doubt having emerged from her place of employment in an office or bank. When we reached the park, I seized the first open bench I saw and began fishing for my opener.

She stopped about 10 feet in front of me, pulled a blanket from her over-sized handbag, and spread it over the sand. Her skirt dropped to the ground, revealing a bikini bottom. The blouse was next, revealing -- well, nothing, as she was now topless on her blanket applying suntan lotion.

It quickly occurred to me that I loved Europe madly, and I proceeded to consume two whole beers before remembering I'd brought sandwich materials.

Lausanne was intended as a less expensive base for seeing surrounding sights, which I commenced doing on Saturday. This photo may have been taken in Lausanne, or perhaps Geneva. Everywhere in Switzerland, the Alps are there, on the horizon 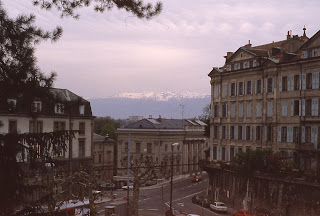