Mailer Wars '15: KZ plays it safe and sticks to the platitudes. 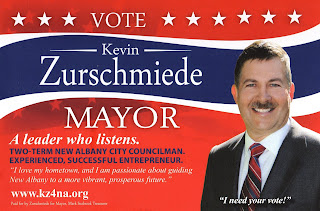 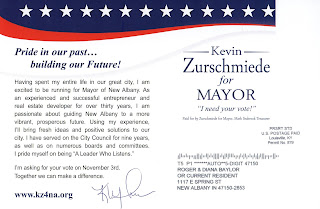 Kevin Zurschmiede's opening statement is very safe. It's the small talk with the father of your date while you're waiting for her to come downstairs.

In large measure, the mayoral campaign to date has consisted of the two major party candidates repeating basic mantras.

Jeff Gahan: Look at these photos of the nice gifts I bought for you with YOUR credit card.

Meanwhile, I've tried my hardest to offer substance: On neighborhoods , and localism, and health and safety, and human rights and free speech -- and yes, also on calmed and completed two-way streets.

Consequently, Kevin's challenge is moving beyond the character references and delving into specifics.

For instance, the mayor has had absolutely nothing to say about economic development or jobs during his reign. This is easy to explain: What development the local economy has undertaken has been in spite of Gahan, not because of him -- and jobs comprise a category defined primarily by persistent hemorrhaging, as with Pillsbury, StemWood and Indatus.

Yes, Jeff, I know: Beach Mold & Tool is expanding -- and the company thinks so highly of your contribution to this expansion that it is hosting the GOP chili cook-off next week.

When there's nothing to say, you tend to change the subject, hence Gahan's "Elvis meets PT Barnum at Walt Disney's penthouse suite" persona.

I've campaigned on a platform of de-emphasizing economic development boilerplate in a time of River Ridge envy, turning attention to the localization of the economy, and devoting our economic development efforts to useful infrastructure improvements toward this end, as with fiber optic communications and two-way streets.

Kevin has not offered specifics, and worse still, he possesses his own 800-lb gorilla: Padgett, an old-school industrial entity which does not comprehend new-school economic development, and in fact has advocated actively against measures to achieve it (those pesky two-way streets, again).

As a candidate, I'm delighted to be the only one of three to so much as mention economic development as a civic priority, and to both articulate and define a future agenda.

As a voter, I find it curious that both major parties are playing prevent defense, but please, be my guest.

In closing, as with the DemoDixieDisneycrats, the GOP appears to be willing to embrace the attack, although even with this, the Republicans are being reactive to Gahan's ludicrous claims. 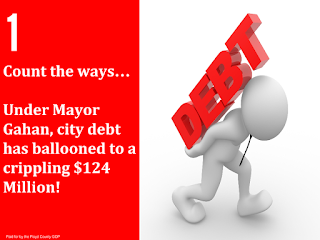 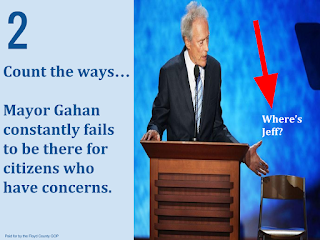