Dickey bolts upright in a cold sweat: "THEY'RE SUPPOSED TO IGNORE HIM!"

The topic to which the chairman of the Board of Public Works and Safety speaks (below), as joined subsequently by the usual sycophants' chorus, is my "Meet the Candidates" segment on WNAS-TV.

My recollection is a suggestion that it be kept to 5 - 8 minutes, but there was no hard and fast rule. I did not rehearse, but read my outline aloud, and it came to about 8 minutes. When finished in the studio, it was remarked that my presentation was a bit lengthy, and if there were any problems, I'd be informed.

I haven't even viewed it yet, but evidently the relevant guidelines were met, seeing as the segment is being aired. I'll get a copy as soon as I can, and share it -- because sharing, not suppressing, is my preferred mode of modernity.

Perhaps it isn't the length of the segment that is of most concern to Team Gahan's resident censors, but the content.

Perhaps they might divert a portion of the incumbent's $180,000 nest egg to purchase mirrors, which are said to assist in the process of self-examination.

However, their record of shamelessness "suggests" this suggestion won't be followed. Are they finished yet? We'll see in nine days.

Take it away, Warren. 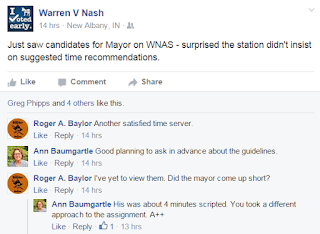 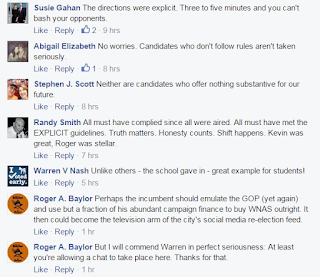 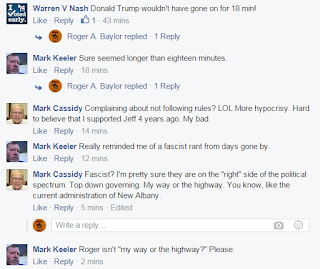