Ceausescu and his cult of personality: Genius, torch bearer and demigod. 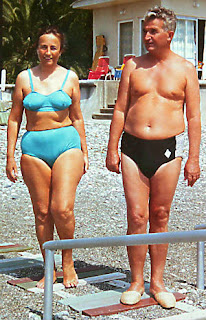 I'm constantly fascinated by the story of Nicolae and Elena Ceausescu.

From December 25, 2014: 25 years ago today, the Genius of the Carpathians returned to room temperature.


Regrettably, the astounding documentary called The Autobiography of Nicolae Ceaușescu has been removed from YouTube (look here)

However, this trailer remains.

Nicolae Ceausescu's rise to power must be viewed as serendipitous rather than the result of brilliance. He was in the right place at the right time, and had Eastern Europe not been a Soviet sphere of influence, it is unlikely he'd have progressed beyond frequently imprisoned Communist agitator.

But rise to power Ceausescu did, and once there, he held his position for almost a quarter century, through thuggish instincts and an uncanny ability to play superpowers against one another to his personal benefit.

As Srebrnik's essay (below) observes, Nicolae and Elena Ceausescu were poorly educated peasants. As power was consolidated, they set about accumulating wealth and luxury far beyond the standard of living in their country, but moreover, they deified themselves, most conspicuously in pretending to be scholars they weren't.

Minions were paid to praise the Ceausescus, and the Ceausescus believed every word of the press clippings. For more on the Ceausescu cult of personality, read the Wikipedia entry.

The purpose of the cult was to make any public opposition to Ceaușescu impossible, because he was considered by definition to be infallible and above any criticism.

“Genius Of The Carpathians,” by Henry Srebrnik (Sheldon Kirshner Journal)

... The country’s long-time despot, Nicolae Ceausescu, in power since 1965, had cultivated an image of himself as a great leader and came to believe it.

Unlike the other, relatively drab, Communist satraps in the region, Ceausescu had developed a “cult of personality” that rivaled those of Joseph Stalin in the Soviet Union, Mao Zedong in China, and Kim Il-sung in North Korea.

The future “genius of the Carpathians,” as he called himself, was born in 1918 to a peasant family in what was, before World War II, a backward Balkan kingdom. A Communist, he spent many of his formative years in prison.

While in prison, Ceausescu had met Gheorghe Gheorghiu-Dej, an influential revolutionary who was installed as ruler of the country by the Soviets when they occupied Romania after the war. Just before Gheorghiu-Dej died of cancer in 1965, he tapped Ceausescu as his successor.

As he consolidated his power, Ceausescu became ever more enamoured of himself. He and his wife Elena — always referred to as “Comrade Academician Doctor Engineer Elena Ceausescu” — began to treat themselves as demigods.

Elena promoted her own fraudulent reputation as a great scientist, and, though barely educated, made sure that the University of Bucharest awarded her a PhD in chemistry. The contents of her many scientific papers were penned by others.

Meanwhile, her husband by the 1980s had become the “torch bearer among torch bearers,” a leader as “unique as a mountain peak,” and a man of legendary brilliance. The Communist Party was placed in the hands of sycophants chosen for their abject loyalty to their leader, who was the very epitome of the Romanian spirit.