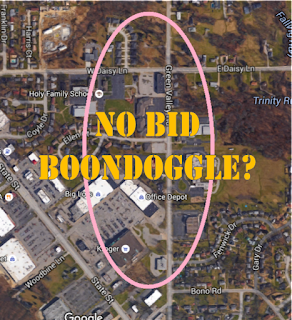 In 2014, against a backdrop of negotiations with Kroger largely hidden from public view, and in concert with the $9 million TIF-funded water park located nearby, City Hall elected to sell a youthful fire station for demolition and build a new one. Public discussion was non-existent.

Kroger paid $1.5 million for the 22-year-old station, and the new station cost $2.2 million. As the Courier-Journal explained, these moves were part of a larger deal.

New Albany officials said previously they intend to use a $5 million bank note to pay for the firehouse construction and improvements to two other firehouses. They’ll use proceeds from the Kroger transaction, as well as EDIT, or economic development income taxes, and TIF, tax-increment financing, revenues to repay the loan ...


Looking at Redevelopment Commission minutes 2012 and 2013, we find that minutes from the latter half of 2013 are entirely missing from the city's web site. What isn't mentioned in those minutes which are available for viewing is the bidding process for the fire station rebuild and accompanying upgrades. Rather, there is a reference to a contract with Axis Architecture and Interiors for $4,275,000.

In short, we sold an asset for $1.5 million, and immediately embarked upon a $2.75 million spending free.

My question: Why did the city sell itself short on the Kroger negotiations?

Not only was very little of this process transparent and the fire station swap an uneven transaction for the city, but we might have played this hand far better, leveraging Kroger's expansion needs with the Plaza's owner and addressing sore points -- the derelict Hardee's building that causes insomnia for Banker Blair, and notoriously bad traffic conditions at the State Street entrance that lacks a stop light.

Why did Jeff Gahan's economic "development" minions consistently undervalue the city's stake in these backroom deals?

Probably because for David Duggins, any negotiating position not specifically constructed to dispense corporate welfare largess at th city's expense threatens to be a deal-breaker.

Ready for a change?

David Duggins doesn't care how much in New Albany tax dollars he gives away. Not his tax dollars. He doesn't live here.