"The grandeur of my physique; the complexity of my worldview" ... utterly lost on the sidewalk bicyclist. 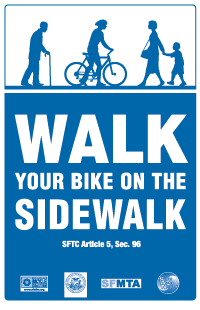 All told, I’d rather be right than wrong, but there are times when the game is too easy. Let me try to explain this.

I was on Market Street, walking toward downtown on the north sidewalk on a sunny Sunday afternoon, when I saw a bicyclist approaching me. He was on the sidewalk, too. It’s where he usually rides. I’m not sure if we’ve ever spoken to one another apart from cursory greetings.

We passed. He was talking on his phone. I already had my iPhone in hand, and out of the blue, it occurred to me that if I turned around and pretended to take a photo of him, he’d already be looking back at me, eager for an excuse to be confrontational.

Photo safely untaken, I kept walking. My ultimate destination was Main Street, and so as I veered left to cross, it occurred to me that he’d have reversed course and elected to follow me. I glanced.

Now on the other side of Market, walking south on 7th, it occurred to me that he’d approach, pass me and mouth off.

Of course, he did, though not about the photo I hadn’t actually taken. It proved to be deeper than that, as it tends to be with fundamentally angry people.

For once pedaling on the street, as opposed to the sidewalk, he rode slowly past, looked back, and derisively asked if one of my friends still smoked pot all the time.

I said there’d be no way of me knowing – and I kept walking.

He slowed, looked back a second time, and remarked that a pirate was the “stupidest” symbol he’d ever seen for a mayoral candidate.

I said yes, perhaps so, pirates being childish and all -- and accordingly, only children ride bikes on the sidewalk, but hey, thanks for putting yours on the street. It’s commendable of you.

This achieved the desired effect.

“You’re not the fucking police … fat cocksucker … I’ll ride this bike wherever I want … fuck you,” and maybe another epithet or two lost in the flying spittle.

I shrugged and kept walking. He rode off.

The anger is so very tiresome, especially since I harbor a great deal of understanding, because as a fellow bicyclist of long standing, I get the whole sidewalk thing.

An adult, even the verbally abusive fellow in question, opts to ride his or her bicycle on the sidewalk because the street is unsafe, and frankly, often frightening.

Drivers pay little attention, are reckless, and drive too fast, primarily because the design of one-way streets – nay, this city’s overall attitude toward the street grid for half a century – rewards anti-social driving behavior on a constant, daily basis.

Riding on the sidewalk may be counter to the sidewalk’s intended purpose as a place to walk, but it is a perfectly reasonable response to unmistakable dangers out in the street, where we routinely coddle mayhem.

Street calming, road diets, complete streets … pick a term, but all point to the same goal, and to the same conclusion: Making streets safe for all users, not just automobiles, the idea being that a city “safe” for bicycles only when they are used on sidewalks is a dysfunctional, deeply problematic place in need of immediate assistance.

True, the reputation of the fellow I encountered today precedes him, and I suppose he might say precisely the same of me. At some point, we probably were bound to clash, because he is just as fanatically opposed to street grid reform as I am in favor of it, and after all, I might have refrained from faking a photo.

My guess would be that in the absence of rational consideration, i.e., the transparently obvious fact that street grid reform would make his bike rides far more enjoyable, he hates the idea of calmed two-way streets owing to his hatred of the sort of person espousing them.

In short, cultural bile over factual substance, and in this I suppose he isn’t atypical.

* The quote in the header is from "A Confederacy of Dunces," which is a classic comic novel about New Orleans, not New Albany. My pyloric valve is quite healthy, thank you.
Posted by The New Albanian at 10/18/2015 08:09:00 PM