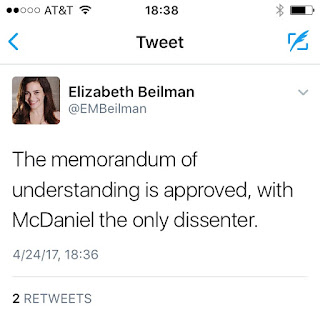 Elizabeth Beilman provided excellent newspaper coverage of the Monday Night Massacre. Her tweet below is a classic of understatement. 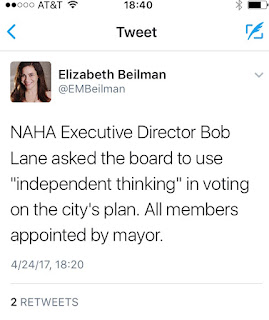 In the end, there wasn't a politician in town apart from Dan "I'm Back on Payroll" Coffey with the courage to so much as notice Deaf Gahan's Public Housing Putsch, much less place themselves within sight of it it.

John Gonder would have taken part, but Gahan kneecapped Gonder, didn't he?

In short, mythology wins. Misconceptions about public housing are almost totemic in New Albany, and Gahan vigorously scratched this anti-intellectual itch, even if it meant compromising every democratic principle he has ever pretended to support.

It's slightly encouraging that for the first time during Gahan's Reign of Error, a handful of key Democrats suddenly found themselves jolted by the reality of the mayor's vapidity.

Consider this vignette, as captured by Beilman. 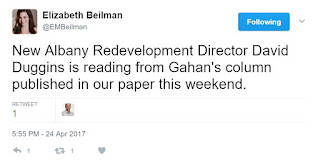 Or, one leering, semi-literate functionary is seen reading words written by a nattily attired out-of-town consultant for an inexplicably absent (again) mayor. Democrats should retain this image, and never forget the fundamental crassness of a man who almost never bothers attending the beheadings he initiates in his own name.

Will they remember? Probably not for as long as star sycophant Adam Dickey is at the reins, but the fact remains that the NAHA imbroglio has weakened Dear Leader. Walking dollar signs are cute, but it doesn't mean they can lead. Local Democrats have placed themselves in the position of praising Gahan for the very same vile tendencies they denounce in Donald Trump.

We can only hope that more of the party's adherents begin feeling the pain borne unto it by Gahan's ego trip.

NEW ALBANY — The New Albany Housing Authority Board of Commissioners initiated the first step Monday in embarking on a plan to demolish and rehabilitate hundreds of public housing units.

The board approved a plan with the city of New Albany on Monday aiming significant changes to the state's third largest public housing authority in an attempt to better leverage a backlog of federal funds and decentralize the city's low income pockets. Only commissioner Kent McDaniel voted against it, saying he needed more time to study the plan.

The board's move strays from recommendations of the housing authority director and instead takes up the vision of New Albany Mayor Jeff Gahan, whose administration proposed the partnership and changes.