THE BEER BEAT: The Dolphin, one of my favorite pubs in the world. 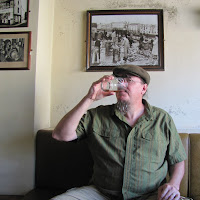 The Hoe is an open green space situated atop a promontory facing south to the sea, where Sir Francis Drake is said to have chosen the leisurely consummation of a lawn bowling session prior to sailing out to face the approaching Spanish Armada.

History does not record Drake’s choice of beverage.

The nearby Barbican is a relatively small but atmospheric quarter of older buildings that somehow survived both World War II air raids and a post-war rebuilding effort that seemed to consciously mimic socialist Bucharest’s.

The Barbican tumbles down the eastern slope of the Hoe’s weather-beaten cliffs and meets Plymouth’s old port, now given over to tourism and pleasure craft.

The Royal Navy base and commercial docks, catnip for the Luftwaffe, are located on the west side of the Hoe, along the mouth of the Tamar River. Beyond the Tamar is Cornwall, with the ocean gradually closing in on three sides until land’s end.

I’ll call it The Dolphin, a “proper” working pub, located mere yards from the spot where the Mayflower departed England for America. Reversing historical travel patterns, we visited Plymouth in 2009, finding The Dolphin suitably equipped with fine ale and delightfully resistant to modern refurbishment.

It was given a minor renovation shortly thereafter, though it seemed little changed when we returned in 2013. A pub regular told me the loos were vastly improved, so there’s that.

The Dolphin’s license holder and publican is Billy Holmes, whose father ran it before him. We haven’t met, but he’s been on duty long enough to become a community fixture.

"We don't do much music, well not more than half a dozen times a year, and we don't do the sports bar thing because that's not us. People come in here because they want a drink and a chat.

"And we don't do food. What would be the point with all the takeaways in the Barbican? People come in here with their fish and chips and have a drink, and that's fine."

Given the chance to complain about the competition from supermarkets selling cut-price booze, he shrugs his shoulders. Young binge drinkers are certainly not Billy's market. Real ale drinkers are; with at least eight on tap, The Dolphin is popular with those who like their beer 'live'.


Few such pubs can boast a semi-official house artist. The late Beryl Cook was a painter who moved to Plymouth after the retirement of her husband. They opened a guest house nearby, and gradually Cook gained fame as an artist. Because The Dolphin was her local, several of her paintings chronicle pub life. 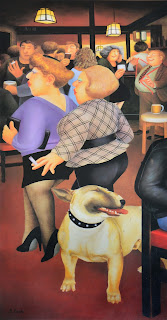 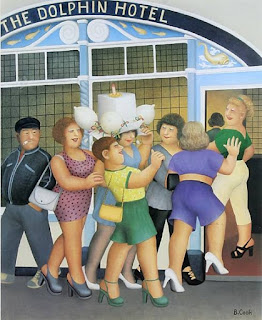 For a visitor, The Dolphin is a fine example of what makes a pub great. The old harbor location is tourist-friendly and the styling traditional, but the landlord hasn’t applied unnecessary gloss and glitz, and he prefers to run the establishment for the sake of its regulars rather than commoditize it.

Consequently, The Dolphin is comfortable without being pretentious. It isn’t someone’s abstract marketing concept. Rather, it is real – and so is the ale, although it will strike some American beer geeks as unusual to learn that the pub’s main draw, at least for me, was the chance to drink Bass Pale Ale served in a rigorously traditional and characteristically English manner.

The firkin, a keg of unique and purpose-built design, lies slightly tilted on its side in a cradle at room temperature. A wooden peg (spile) faces skyward, filling a hole that had been punched at tapping.

A faucet, tapped into place with a rubber mallet, protrudes horizontally from the firkin. The onrushing ale is borne on a gravity trail, pouring from the opened faucet into a waiting pint glass, cool but not cold, with minimal yet sufficient natural carbonation.

Perhaps the only nod to modernity is the use of stainless steel, rather than wood, to fabricate the firkin. Otherwise, it is likely that Plymouth’s publicans were filling tankards in like fashion almost four hundred years ago as the Pilgrims prepared for their voyage to the New World by loading their own barrels of ale onto the Mayflower.

When they ran out, it was time to find a place to brew more.

The Dolphin decants its Bass at room temperature in this simple, old-fashioned way, unpasteurized, and without the forced-pressure C02 system to which the world has grown accustomed, because the ale itself is naturally carbonated, or cask-conditioned, in the firkin by means of a secondary fermentation.

Although comparatively few English pubs follow the venerable example of the Dolphin’s gravity-pour method, many of them continue to vend one or more cask-conditioned ales with the help of a beer engine, colloquially referred to as a hand pump, or a hand-pull.

Their firkins are stored in the coolness of the cellar, where they are tended and prepped for serving. When ready, the ale is pumped by the barman into eager pint glasses.

At their traditional finest, balance is the watchword for all English real ales, especially those quaffable Bitters, and cask-conditioning is more than a way of drinking. It’s a way of thinking.

Flavors are subtle and even simplistic, yet unmistakably rendered. The malt character is rich and sweetish, with a touch of fruitiness. The classic English hop varieties are elegant, packing less of a bitter punch than their American cousins.

Historically, the alcoholic strength of English ale tends to be lower than one might expect, perhaps averaging around 4% abv. It is this sessionability that one misses most here in America, where we’re usually packing taps with 6% abv beers or higher.

Cask-conditioned “real” ale is thirst quenching or contemplative, depending on one’s mood. It tells the story of slow food, green living and an appreciation of traditional virtues in food and drink.

A place like The Dolphin is real ale’s natural urban habitat. We’ll make it back there some day, hoping the Bass is still pouring.
Posted by The New Albanian at 4/07/2017 10:34:00 AM

The proper old way to serve Bass, as still practised by the Star Inn in Bath for example, is to pour the beer into a jug and then into the glass. This gives a double agitation of the liquor to aerate it and improve the head.

And The Dolphin is my favourite place, let alone pub, in the world, been drinking there since 1978.

Thanks, Stibs. Now I need to get to Bath.