Back by popular demand: “Never trust anyone wearing a suit.”

I don't hate on men (or women) just because they wear suits.

It's just that one's fundamental humanity need not be reflected by the price of his or her clothing. Many very intelligent people wear t-shirts. Perhaps they do it as a conscious blow against ostentatiousness, although there's always the possibility that jeans are more comfortable. 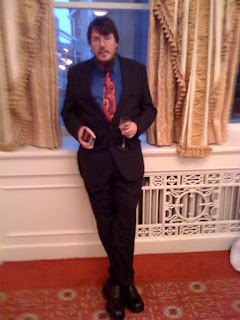 ... how do I even know the meaning of a word like ostentatiousness? Is it a fluke? Can one even be a wordplay poseur while swaddled in a hoodie? 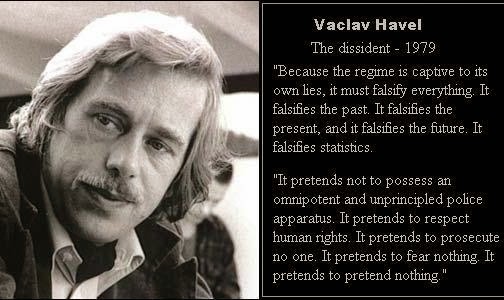 It's 2015, and I'm reading a biography of Václav Havel: Havel: A Life, by Michael Zantovsky.

The secret police also came for the philosopher Jan Patocka, Havel’s fellow Charter 77 spokesman. Patocka did not survive interrogation, and Havel dedicated what became his most famous text to his older friend’s memory. “The Power of the Powerless” tells the story of a greengrocer who every morning obligingly puts the sign “Workers of the World Unite” in his shop window. Of course neither the greengrocer nor the passers-by believe the sign. Even the Communist regime no longer believes the sign. Yet everyone goes on pretending. Pretending is in the greengrocer’s interest, for it allows him to live in peace. If one day he were to take down the sign, he would be harassed, perhaps arrested. And yet, Havel points out, if one day all the greengrocers were to refuse to hang their signs, that would be the beginning of a revolution. Therefore the powerless greengrocer is not so powerless; on the contrary, he is responsible and therefore guilty: By failing to “live in truth,” he makes it possible for the system to continue.


Rather like New Albany persisting in pretending that its Democrats really are, although we're not entirely powerless. They can be voted out.

In 2011, during my unsuccessful city council campaign, I offered this opinion of suits -- the clothing. Looking at the photos in Zantovsky's fine book, Havel always seems more natural when dressed as an artist, playwright and dissident. In point of fact, I do own a suit. Since losing weight, it's too large, and so a trip to Sew Fitting is in order -- which is not to say I cherish the thought of wearing it.

A Candidate’s Progress (11): Suit yourself. Plaid?

The Woodstock festival took place in 1969, when I was only nine years old -- too young to completely understand what was occurring in America amid the generational upheavals depicted nightly on the tube, and yet capable of registering their impact in my evolving consciousness.

Something was happening, and not unlike Bob Dylan’s musical Mr. Jones, I didn’t know what it was. But it was exciting, if for no other reason than an older generation’s (read: those of my parents’ age) often expressed annoyance and exasperation with it.

One of the mantras of a turbulent period devoted to letting it all hang out struck me at the time as enduringly valid advice: “Never trust anyone wearing a suit.”

Obviously, the powers that be – the wielders of capital, the exploiters of the proletariat – all wore suits, and insofar as the middle and lower classes inevitably imitated the mores of their wealthier “betters,” it was a form of unwitting obeisance better avoided than indulged.

Bizarrely, here was a topic on which both the Baby Boom hippies and my Great Depression father should have been able to agree, had it not been for his inability to move past the length of their hair and listen to what they actually were saying.

If my dad owned a suit, it was reserved for weddings and funerals, and worn grudgingly even then. He was a working man’s populist to the very core, and usually as suspicious of moneyed elites and polite society as any bandana-wearing revolutionary. In a different country than the United States, one with more than two political parties to channel belief, his course in life might have been profoundly altered.

However, like so many others, in striving arduously for his sought after place in a middle class perhaps already doomed, even in the late 1960’s, he was inexorably steered by those very same besuited powerbrokers into emulating them by craving a modicum of their material trappings.

In fairness, a vast majority of the rebelling hippies at Woodstock eventually discarded their own youthful principles, taking the same materialistic path, but diverging from my father’s way in one very important sense: The Baby Boomers aged and became steadily more selfish, to the point that they’re now refusing to pay taxes.

Meanwhile, to the end, my father retained his agrarian communal instincts. Somewhere else, he might have been one hell of a socialist. We’ll never know, and that’s a shame.

No, not really. It is not a matter of trust, and I trust plenty of people who wear suits. Conversely, I seldom ever wear one, because I don’t have to. Comfort, personal preference and an active desire to enjoy what I do and not feel constrained by unnecessary adornments have conspired to result in an absence of suits in my closet. You’re free to dress as you please – or as you must. Just leave me out of it, please.

While it is true that for a brief period during Junior High School, I took an active interest in dressing according to society’s restrictive expectations, a candid assessment of acne-laden adolescent gawkiness led me to realize that a life of high fashion was not my likely destiny.

So be it. Know thyself; when you dispense with redundant fantasies of a GQ modeling gig, you’re free to use your entire brain, unbound by convention, custom and prejudice. It’s almost as liberating as Woodstock, and there are times when it still infuriates the unreconstructed Nixon generation.

That makes me very, very happy.

There are many reasons why the craft beer milieu “suits” me as a job and avocation, and one of them is the casual nature of its dress code, which “suitably” contrasts with assumptions about the genre’s dynamic, expansive business success.

Huh? Say what? Growth nationwide … during a recession … and seemingly none of you wear appropriate business attire so as to buff and fluff the share holders? How on earth is that possible?

It’s because it matters far less what we look like than how we conjure our performance in the marketplace, and besides, if we had conformed to the expectations of what fuddy-duddies believe beer should be, there’d be no craft beer business at all.

Craft beer creates interest where there was none. It adaptively reuses, and leaps ahead of habit. It is vibrant, evolutionary and exciting. How many rock stars wear suits on a regular basis? Aside from Bryan Ferry and perhaps David Bowie ...

I dress casually for the requirements of my job, just the same as those bankers and lawyers with whom I transact company affairs, and who, at their first opportunity, gleefully change into shorts and a t-shirt to come drink some of the craft beer that’s brewed thanks to all of our labors, suited or otherwise. The wonderful part of my career is that I can dress the same way working, drinking, or all of the above. It simply does not matter what I wear, nor should it.

A college professor friend, himself a veteran of the Age of Aquarius (and who may be reading this essay), used to greet unsuspecting new sociology students in the guise of a custodian. With the class still awaiting the arrival of the instructor, he’d enter the room clad in work overalls, lope around, dust a shelf and empty the trash can -- and then begin talking about sociology.

You can imagine the students’ collective reaction, gleaned entirely from conditioned responses to mere appearance, as opposed to content: Who does that lowly janitor think he is talking to us about sociology? What could he possibly know? As it always turned out, he knew quite a lot – if the listener chose to look past the hair, beard and coveralls.

Given that I entered the race for at-large city council as an outspoken contrarian already thoroughly loathed by those discredited Dixiecrats pretending to be Democrats, it is perhaps inevitable that the oldest of these perpetually irrelevant fogies will criticize me for not looking the part of a politician, whatever that means, even while they excuse the typically slovenly appearance of their antebellum, regressive darling, Steve Price.

It is hypocrisy, but I do not begrudge it. They wouldn’t vote for me under any conceivable circumstance, whether I’m clothed in an Armani suit, Newt Gingrich’s loincloth, a hoop skirt or medieval armament, so why does it matter, apart from another opportunity to remind myself that while I might age, I won’t let my attitudes grow old and stodgy like them?

For the rest of you, those capable of discerning thoughts and ideas, we’ve been having a marvelous discussion for quite a few years, and we’ll continue to do so – win, lose or draw.

If you’ll kindly excuse me, I have a load of “These Machines Kill Fascists” t-shirts to wash. One of them needs to be clean and tidy for my next public appearance, at IUS on Friday evening. Hope to see you there.