7 Days of Piketty: Tuesday, or "Egalitarianism’s Latest Foe: a critical review of Thomas Piketty’s Capital in the Twenty-First Century." 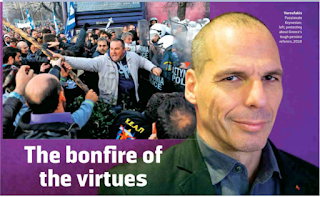 I'm publishing seven days of links to web material about Thomas Piketty and his book, Capital in the Twenty-first Century. Prior to reading the book, my friend Brandon warned me that it wouldn't improve my mood.

It didn't, and reading the book evidently did nothing for Yanis Varoufakis' mood, either. Varoufakis gives a leftist economist's reply to Piketty here. Just know that the fundamental point is the difference between wealth and capital, and the truths flowing from this difference. Pour a stiff drink first. It took me a while to get through it.

The commercial and discursive triumph of Thomas Piketty’s Capital in the 21st Century symbolises this turning point in the public’s mood both in the United States and in Europe. Capitalism is, suddenly, portrayed as the purveyor of intolerable inequality which destabilises liberal democracy and, in the limit, begets chaos. Dissident economists, who spent long years arguing in isolation against the trickle-down fantasy, are naturally tempted to welcome Professor Piketty’s publishing phenomenon.

The sudden resurgence of the fundamental truth that the best predictor of socio-economic success is the success of one’s parents, in contrast to the inanities of human capital models, is undoubtedly uplifting. Similarly with the air of disillusionment with mainstream economics’ toleration of increasing inequality evident throughout Professor Piketty’s book. And yet, despite the soothing effect of Professor Piketty’s anti-inequality narrative, this paper will be arguing that Capital in the 21st Century constitutes a disservice to the cause of pragmatic egalitarianism ...