The NewAlbanist: "Here’s what a market vendor wants: A market where (many) people come to buy their farm products." 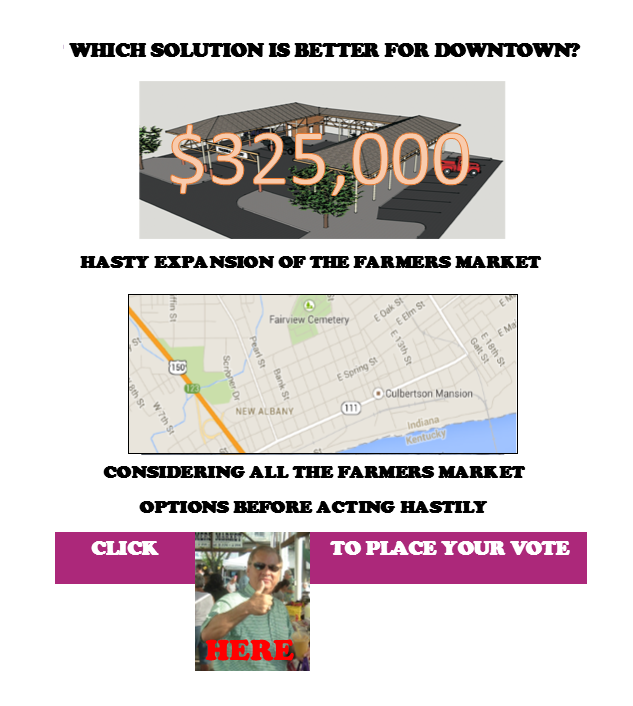 The Bookseller nails it.

Somewhat tongue in cheek, he gauges the probable reaction were the city announce the farmers market's move to his building, for the same price. It made me think of a comment in a newspaper column by Jason Thomas devoted to ruminations on living spaces (and the lack thereof) in downtown New Albany.

Construction has happened in fits and starts in New Albany. River View, the proposed $42 million mixed-use project just east of the YMCA that included condos, would have done wonders, but fizzled financially in 2012. The Coyle property on Spring Street also is a prime spot, but a recent deal also fell through, according to (Mike) Kopp.


There sits the old Frisch's/Coyle Dodge building with garage doors and voluminous parking, just across the street from the book store; what if the city's inevitable abatement package of corporate-only incentives with a developer included a provision to transform it into a farmers market hub?

Whoa; sorry. Minting an idea like that violates the "no outside the box thinking" ordinance, and also would yield no opportunity to provide the Marktmeister with another cash infusion.

It Costs Far Too Much

Building a new shelter and bathrooms for New Albany’s farmers’ market is a bad idea made worse by a stunningly high price tag attached to it. Very little I’ll say here that I haven’t said before, but it clearly needs to be said again. The farmers’ market needs no expansion ...

... And yet, here we are trying to stop the city from pouring vast sums into a farmers’ market that’s open 216 hours a year.


Consider going to the polling page and disrupting DNA's bush league tactics by voting for the parking garage. Real poll questions for real people, here.
Posted by The New Albanian at 3/19/2014 07:16:00 PM