The farmers market in Madison WI lacks facilities. No one goes there any longer because it's too crowded. 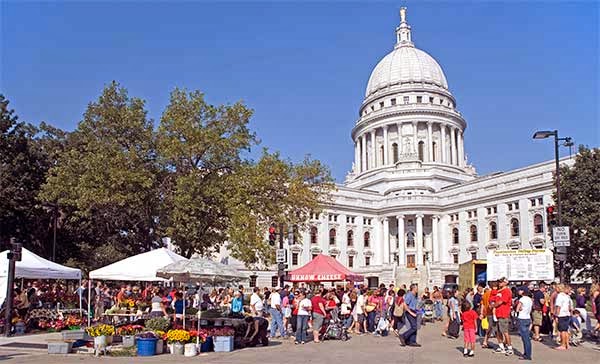 Yesterday: DNA can come out of the farmers market dust-up smelling like the proverbial rose. All it needs to do is follow this script.

For almost a decade, NABC has joined in the fun at the Great Taste of the Midwest each August in Madison, Wisconsin. The festival takes place in the afternoon, giving the crew time to visit the Dane County Farmers Market during the morning hours.

In New Albany, it is not possible to argue that the current location of the farmers market matches the aesthetic grandeur of Madison's. It isn't even possible to argue that we make optimal use of what urban grandeur we have; if so, we'd have espoused the idea of multiple use and folded a farmers market design into Bicentennial Park, or used the monies spent on Bicentennial Park (and allocated for farmers market expansion) and actually finished the Riverfront Amphitheater instead, because the closest thing we have to impressive physical presence is the Ohio River itself.

Either an Amphitheater duly embraced, or what became Bicentennial Park, might have been the perfect integration of farmers market into bigger ticket project. Now we are asked to accept the notion of another big ticket for the farmers market.

Meanwhile, Madison's farmers market is "big ticket" in every conceivable sense of the phrase ... and possesses no big ticket infrastructure in terms of cash. And did I mention, packed with people every Saturday?

All I can do is siigghhhhhh and pine away.