What I learned this week, local indie business owner's edition. 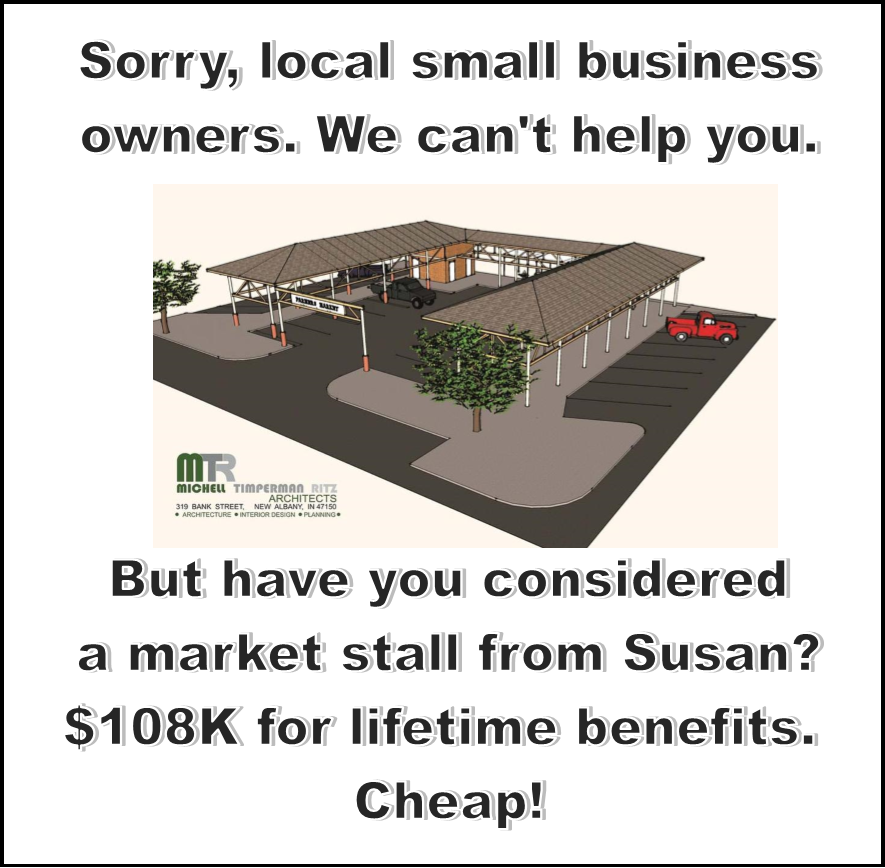 Last night, Susan “Marktmeister” Kaempfer was permitted (nay, actively encouraged by both city and council) to erect a straw man (“they’re going to take away our farmers market”) and to smash it to pieces. This she proceeded to do, as any five-year-old child might have done in the absence of adult supervision.

It should suffice to say that adult supervision did not materialize.

The council needn’t have abetted it by moving non-agenda speaking time forward, but it did, because the body does not possess firm, principled leadership. It has barely any leadership at all in the absence of texting the Democratic Party chairman prior to meetings.

City Hall remained aloof because it received a few phone calls, and it persists in thinking that the telephone is the only means of communication on the planet, and so it feared them, reverting to the traditional rope-a-dope: Heck, we can’t do anything. After all, we’re only the mayor and chosen staff. Let the council have what it wants, as inherited from the departed England administration.

It was the usual black eye for New Albany; the usual squabbling, bickering and nutjobbery, and the same old political paybacks to the same old suspects without any intrusion of contemporary reality. Of course, at the end of the meaningless, senseless, insulting, Kaempferesque spectacle, there was no firm resolution of anything at all, because there was no rational consideration preceding or prompting any of it. There was nothing to vote up, or down, just fetid air heavy with fear, loathing and lies.

As Billy Preston once advised, “Nothing from Nothing Leaves Nothing,” although in New Albany, nothing from nothing leaves a $300,000 bill for a project on a plot of land no one knows the value of, on behalf of a transient retail organization, as politically enabled by a non-profit group unable or unwilling to restrain the for-profit political avarice of certain of its members. City Hall slouched, whistling. Thumbs were twiddled. Shirley Baird nodded knowingly to a tomato vendor, whose thumb would be taken off the scale henceforth.

But here’s the kicker.

We already knew it. Been there, done that.

There may be fifty ways to leave your lover, but in New Albany, there are 108,000 ways to know when the fix is in. Rather, here is what I learned yesterday, as composed of two equal parts: First, the morning meeting between city officials and representatives of downtown groups, at which we learned that economic development policy (or non-policy) is determined solely by the "tools" handed down to the city by others, and are confined by a box with clearly delineated lines that preclude creative thinking, and second, the staged, pre-arranged and gloriously Abner Louima’ed farmers market debacle.

In New Albany, part-time, short-term market vendors, most of whom do not reside in New Albany, and who avail themselves at rapidly escalating city expense of the farmers market facility for 40-odd prime days during the year, are far more worthy of City Hall’s and the city council’s attention and money than local independent small business owners who have invested millions of dollars and countless hours in operating 365 days out of the year.