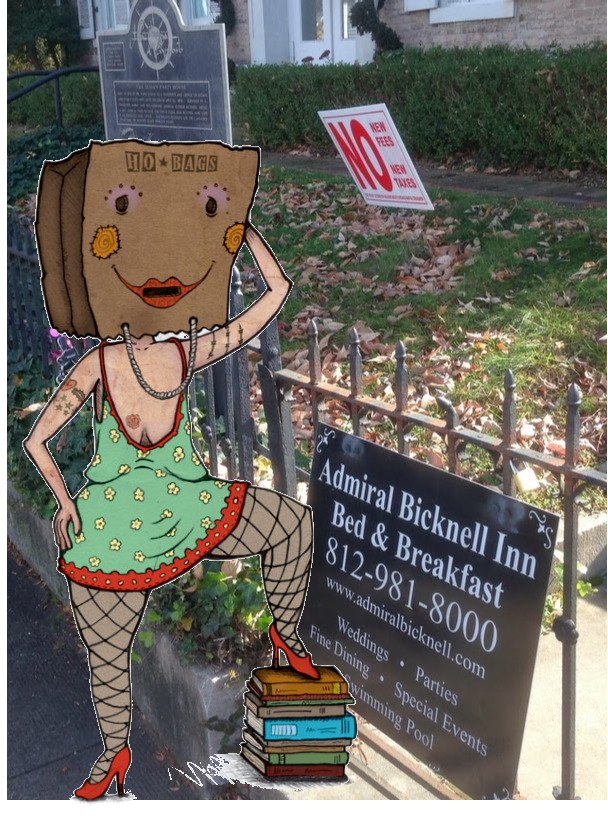 Rather than link you to Erika's unkempt litter box, from whence various disordered personality viruses lurk and the stench of unfiltered Chesterfields send you running for a handy Febreze, I'll merely reprint all of it right here.

For those newbies just tuning into the chronic illiteracy fest that is New Albany, suddenly trendy or otherwise, Freedom of Speech is a production written, produced, directed and oozed by a perpetually disgruntled woman named Vicki Denhart, who in it plays a role of her inspired creation, Erik, a bok-reading college professor who does not exist, this fiction being necessary so that her Fred Phelps-like thunder-puffs can be hurled anonymously, without comment. This, then, is "freedom" of speech, Erika-style. Occasionally she takes her show on the road to council meetings, lurching and rasping through lengthy denunciations of modernity until the nicotine fades.

Verily, cities can be defined by the persistence and oddity of its one-chord, obviously affected eccentrics. Perhaps we can name a tax after her ... after her.

Psst, officer ... looks like we have a new customer for the enchanted kingdom.

THIS BLOG IS DEDICATED TO ALL THE LITTLE PEOPLE IN NEW ALBANY. ALWAYS REMEMBER THE FREEDOM TO SPEAK NO MATTER WHAT THE SITUATION. WE ARE NOT GOING TO GIVE THESE FREEDOMS AWAY. NO ONE SHALL TAKE THESE RIGHTS FROM US. THE MOMENT WE BEGIN TO SEE THE PERSONAL AGENDAS IN CITY GOVERNMENT, WE SHOULD SPEAK OUT. WE NOW HAVE A VOICE. WE CAN MAKE A DIFFERENCE ON THE WAY OUR CITY GOVERNMENT OPERATES. MY PHILOSOPHY IS COMMON SENSE AND SEEING THINGS AS THEY ARE, AND DOING THINGS AS THEY SHOULD BE DONE.


DUMBEST STATEMENT WE EVER READ.....

"Won't be a traffic study" but traffic will be studied."

We really do believe Mr. Speck says whatever pops into his head without forethought at all. $75,000 is just another EASY pay check and some free beer to him.

Talk about a Conflict of Interest.

Why are they wasting $75,000 of our money when there are"more important issues" that need dealt with?

A message to Mr. Warren Nash: How do you sleep at night?

Mr. Baylor if you want a walkable city, why don't you just do us all a big favor - move and stop "bullying downtown business owners."  Several businesses have told us, they put those stupid signs up just to shut you up!

Like the bible says: "the truth shall set you free."