REWIND: Douglas England will be remembered primarily for fixes like this one. It's why he had to go.

(And why he needs to stay away. Originally published on November 19, 2011)

Nothing much needs to be said about this revelation apart from what we already knew, because you can only vomit so much before the dry heaves begin in earnest. Thanks to the newspaper for publishing the information, albeit belatedly; the margin of defeat might have been even worse, but we'll take what we can get -- just like she did.

Mayor Doug England’s administration was within its right to hire Develop New Albany President Susan Kaempfer at a rate of $50 per hour to serve as program manager of the Midtown neighborhood housing project, state officials have confirmed.

Kaempfer — who was vice president of the nonprofit Develop New Albany when she was awarded the contract — was paid $108,401 from June 28, 2010, to Aug. 18, 2011, according to records provided by the administration. 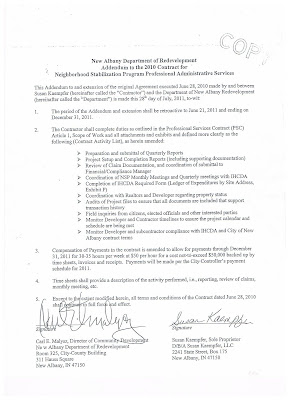