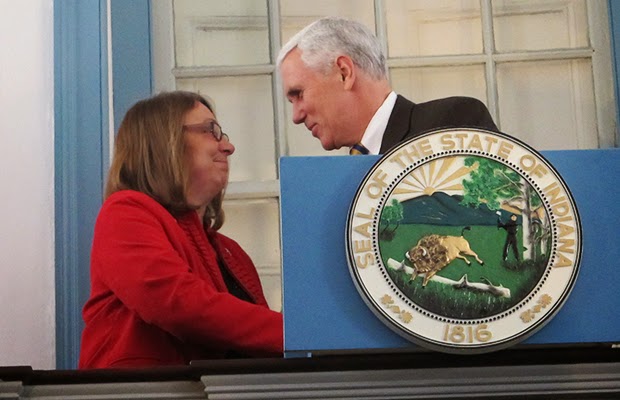 In this touching photo, Rhonda Rhoads and Mike Pence agree with creationists on the age of the planet
Before we jeer yet another instance of Governor Mike "49% Landslide" Pence as a cartoonish cardboard cut-out ideologue of a political Neanderthal (note that I'm not arguing against this characterization), let's first look at what his most likely supporters on the Hoosier Falangist Front are saying at what I'd guess is one of Dave Matthews's favorite bile collection points.

Celebrations by parents, teachers, and taxpayers across the political spectrum over the purported death of Common Core in Indiana may have been premature. When legions of outraged Hoosiers forced lawmakers to pass legislation dropping the Obama administration-pushed nationalization of K-12 education, which Republican Gov. Mike Pence signed on Monday, they thought that would be the end of the deeply controversial standards. However, now that drafts of Indiana’s “new” standards have emerged, it is clear that they were largely copied and pasted from the scandal-plagued Common Core ...

Now that you have the "other" side of the story, go ahead and jeer.

Indiana Gov. Mike Pence on Monday signed legislation dropping education standards adopted by nearly every state, claiming the Hoosier State would be better served by its own learning benchmarks.

Indiana becomes the first state to drop the Common Core standards implemented in recent years to prepare American students for college or the workforce.

The standards, which involve, English, math and language arts, are the product of an initiative sponsored by National Governors Association and the Council of Chief State School Officers ...

Whatever happened to Tony Bennett, anyway?