Demolition Man: Either Gahan lied about the NAHA "memorandum of understanding" from 2017, or he lied to Mark Elrod Tower residents in 2019. Which is it? 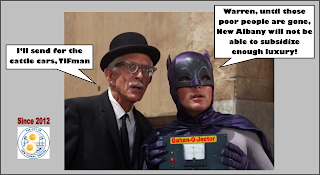 On April 2, 2019 a discombobulated chihuahua on Zoloft -- also known as Mayor Jeff Gahan -- informed a group of public housing residents at the Mark Elrod Tower that he was the greatest public housing mayor in the city's history.

In which Deaf Gahan asks: “Okay, what’s the ISSUE with Riverview? Do you KNOW people who live over there? I mean, WHY are we talking about Riverview?”

These are exact quotes, by the way.

We have 1,187 (public housing) units, which is more than anyone in Clark County, any five counties combined, we have more than anyone, and we’re going to keep – that’s the way it’s going to stay, with more opportunities to live here in New Albany than any other place, but what we won’t put up with is sub-standard housing. It’s not, we’re going to make it better, make improvements, and you know I, I feel great about it, and you all should be too – I think you all should be really thrilled about it.

In the city of New Albany we have 1,187 units, and for many years you had to go through this period where at the federal government they were kind of turning the screws and they weren’t putting the maintenance money that they needed to maintain the properties down here, so, we knew we needed some maintenance done but it didn’t really get down here like we wanted it to, and that trend is continuing, uh, the latest budget they’re pushing for has a 16% reduction in funds for housing and urban development. So we’re still committed to making this, everything, every unit, the top flight, and we’re going to continue to do that, and I can tell you that’s going to happen, uh, we’re taking every step that we can possibly make to make sure that every unit is as good as it can possibly be.


If you're a rational individual favoring logic, and knew nothing else about the recent history of public housing in New Albany, these comments could be read in no other way than as an enthusiastic commitment to improve and maintain 1,187 public housing units in New Albany.

What's more, nothing else Gahan said to these senior citizens during 25 minutes of often disassociated rambling contradicts this conclusion. At no point did he mention demolitions or reductions, only "exciting" and "cool" things he's doing to ensure the future of public housing.

And yet in 2017, when Gahan abruptly seized the New Albany Housing Authority, he stacked NAHA's board with groveling sycophants, blocked then-director Bob Lane's 1:1 rejuvenation plans and putsch-started a process ending with the installation of redevelopment commission bag man David Duggins as NAHA director (gifting Duggins with a substantial pay raise to perform a job for which he had absolutely no experience), and he did so with no mention whatever of caring for 1,187 units.

Rather, Gahan's monotonous droning was accompanied by a soundtrack of queued bulldozers purring. Public housing was to be downsized by MORE than half, and displaced residents equipped with vouchers for non-existent rental housing before cattle cars shipped them to Outer Greenville.

The News and Tribune's typically tortuous and poorly worded editorial of March 11, 2017 at least managed to clarify the central point of Gahan's hostile public housing takeover.

On Monday, the New Albany Housing Authority board will consider a plan, brought forth by Mayor Jeff Gahan’s administration, to tear down an estimated 635 of New Albany’s 1,100 units. Those units affected would include Parkview Tower, Parkview Terrace/Broadmeade, Vance Court and Riverside Terrace.


There was an agenda delay owing to an illness suffered by public housing Bob Lane, allowing Gahan to share his "perspective" about social engineering in a column that wasn't entirely robotic, suggesting he almost surely didn't write it.

This plan is not radical, mean-spirited or punitive. No public housing resident will be left homeless. The units that are slated for demolition are in such poor condition that it is not practical or responsible to repair them. Contrary to media accounts, we intend to rebuild a portion of the unfit units that will be demolished. While there will be fewer traditional public housing units once the plan is complete, NAHA will provide support to the same number of people as it does now, but the mix of subsidies and NAHA-owned units will change. This plan does not mean the City or NAHA is turning its back on our commitment to public housing.


Two days later the memorandum of force-fed disruption was approved by the stacked housing board, and a short time thereafter Lane was served with his walking papers.

NEW ALBANY — The New Albany Housing Authority Board of Commissioners initiated the first step Monday in embarking on a plan to demolish and rehabilitate hundreds of public housing units ... the board's move strays from recommendations of the housing authority director (Bob Lane) and instead takes up the vision of New Albany Mayor Jeff Gahan, whose administration proposed the partnership and changes.

The board's vote was a disappointment for the dozens of public housing residents and local advocates who packed the board room Monday in opposition.

Some who spoke before the board worry that transitioning away from brick-and-mortar housing to vouchers, though it follows a national trend, isn't as easy as it sounds.
Lynda Wilcox, past president of the board of commissioners, said being awarded a Housing Choice Voucher doesn't guarantee someone housing.

"I would implore you," Wilcox said to the board. "I know that you've all been appointed by the mayor, I know that's of great interest, but please understand, there are no rental units in New Albany for this number of units that they're talking about taking down. There are good ways to do this, compassionate ways to do this."


And so we return to the present day, and Gahan's remarks to residents of Mark Elrod Tower. Did Gahan patronize the seniors by flatly lying to them about his halved-NAHA wet dream?

There's almost no other conclusion, unless something else has changed; perhaps Gahan and Duggins have undergone a conversion to compassion, and there'll still be 1,187 units (as you've surely noticed, MORE than Team Gahan calculated in 2017) in 2029.

It would be really cool if Dear Leader would clarify this. Until then, what about some Kool-Aid and Loaded Rice Krispies Treats for progressive Democrats who can't seem to grasp why this matters?

NA Confidential supports David White for Mayor in the Democratic Party primary, with voting now through May 7.
Posted by The New Albanian at 4/12/2019 08:49:00 PM