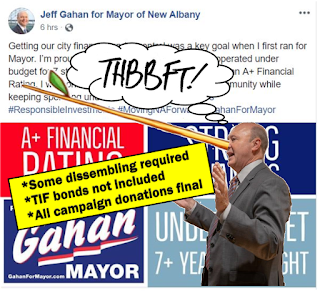 "New Albany Mayor Jeff Gahan keeps sending extremely misleading messages to the public, crediting himself for a balanced budget and an A+ financial rating.

"What he doesn’t explain, of course, is that state law demands a balanced budget from every mayor and that, when one views the financial rating system on the whole, an A+ actually ranks as fair to middling. Each time a citizen intervenes to explain the above so the public actually understands what they’re looking at, their 100% factually accurate comments are deleted.

"Gahan not only lies but works hard at keeping others from telling the truth. Those of you who vote for him are voting for that. Here’s to hoping you get to experience a lot of similar behavior in your professional and personal lives. After all, that’s what you want, isn’t it?"

He also reminds us that partial truths reveal Gahan's lack of ethical bearing, just as much as outright honking whoppers.

"For anyone interested in understanding/refuting Gahan campaign lies, here’s a handy reference chart showing the actual bond/credit rating system. It runs not from A to F as most people are familiar but from AAA to AA to A to BBB. An A+ is a much lower grade than people are being led to believe."

In fact, we're only a step above "speculative grade." Ouch.

Borrowers are rated by S&P on a scale from ‘AAA’ to ‘D’. Investment grade ratings are securities with higher ratings of ‘AAA’ (highest) to ‘BBB-‘. These represent bonds with the highest creditworthiness.

Below is an outline of each grade and what it means in terms of financial commitments and credit viability.

A
Debtors with an ‘A’ municipal bond rating have a strong ability to meet their financial obligations. However, they are more vulnerable to economic and circumstantial changes that could affect their overall repayment strength.

‘A+’ debtors are upper-medium grade with a low credit risk. Their susceptibility to economic changes keeps their ratings from the ‘AA’ and ‘AAA’ ratings. ‘A’ debtors also represent a strong ability to repay short-term debt but lack the same strength in long-term obligations.


I asked Bluegill if there was a ready definition for "economic changes."

"I’ve never seen anything that specifically defines them, though it would depend on how the debt and repayment are structured. Since our debt is mostly TIF based, anything that could negatively impact property tax assessments or projected increases in assessments would be a factor, especially since we live in a state with property tax rate caps."

Something like another recession? it would be interesting to see how we shape up today interms of overall debt and exposure versus 2008.
Posted by The New Albanian at 4/29/2019 08:40:00 AM