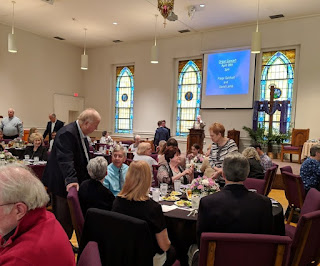 Many gluttons for excess in Southern Indiana celebrated Saturday evening with Thunder Over Louisville.

But it also was the occasion for “Celebrating Faithfulness to Mission and Ministry” at Centenary United Methodist Church.

Church prepares for next chapter

But the church isn't just looking to the past as it celebrates its anniversary this year. Centenary is also preparing for a brand new chapter.

In November 2018, the congregation voted to sell its property at 309 E. Spring St. due to the costly upkeep of the historic building and a dwindling congregation. However, Centenary will have a new home starting in late June, which the church plans to announce in April, according to the Rev. Harriett Akins-Banman ...


No doubt some readers are scratching their heads; after all, am I not an atheist, and as such, why would any of this matter to me?

I am, but I'm also historically minded. It's fascinating to contemplate 180 years of history at a downtown block, and compelling to consider the church's decision to sell the church property and move to a new location.

Centenary United Methodist Church, downtown -- it's half a city block, now up for sale.

As an aside, the Green Mouse says an acquaintance took roll during the 180th anniversary meal at Centenary. Local elected officials and candidates present for the function were Councilman David Aebersold (a church member and trustee). Fellow at-large councilmen David Barksdale and Al Knable also were seen, along with mayoral candidate Mark Seabrook and 2nd district council candidate Scott Stewart.