Routine traffic stops? "Let's stop using the terrible design of our cities as a random pretext and, instead, be proactive about fixing the design." 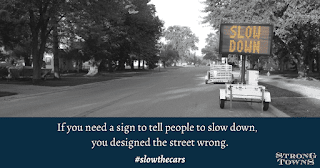 I'm having trouble finding the extract from this essay that best conveys the central point, so I've chosen two.

Routine Traffic Stops Should Not Be Used to Fight Violent Crime, by Charles Marohn (Strong Towns)

“I’ll bet we can watch him drive for five minutes and pick out a traffic infraction.”

Those were the words of a Louisville police officer speaking to a resident about her son. The young man had been pulled over for an improper turn, which led to a lengthy episode in which he was ordered from his car, frisked, and then handcuffed while his (turned out to be mom’s) car was searched and, to a degree, dismantled.

There is a lot of outrage about this video. It’s a case study in psychology, and not a flattering one. But I’m not going to focus on that. Instead, I want to return to a topic I’ve written and spoken extensively about: the routine traffic stop.

Back in 2016, I wrote a column calling for an end to the routine traffic stop. My arguments were simple. First, routine traffic stops are very dangerous for police officers. Second, they have little to do with traffic safety. And, third, the pretext for most routine traffic stops—that someone has committed a traffic infraction—is arbitrary, disingenuous, and ripe for all the worst kinds of abuse.

Randomly enforcing traffic laws that are routinely ignored in other times and places (because they are not well-correlated to actual safety) as a pretext to initiate contact with high crime populations is unnecessarily dangerous for all involved. In addition to breeding resentment, I also strongly suspect it does not reduce crime, although it creates the illusion of fighting crime.


There is a breakdown of the Louisville incident, then several conclusions.

And because I care about traffic safety, when the GPS coordinates associated with traffic infractions show a cluster of violations in the same spot, we need to get our engineers and urban designers out there to make some changes to the site. Our streets should be designed to be intuitively safe. If people are repeatedly doing unsafe things in a specific place, that indicates a design issue. The answer is to fix the design.

And because tens of thousands of people die in automobile collisions each year, and many more people—inside and outside of vehicles—are maimed and crippled through auto crashes, I want traffic enforcement taken seriously. I want it to focus on serious deviants: those operating a vehicle in ways that are threatening. And I want it done by traffic police, not by a violent crimes unit using traffic law as a pretext for a fishing expedition.

NA Confidential supports David White for Mayor in the Democratic Party primary, with voting now through May 7.
Posted by The New Albanian at 4/13/2019 08:32:00 AM