The 19th-century French poet Charles Baudelaire, quoted twice in one morning by the Freedom from Religion Foundation (Twitter) and The Economist (daily Espresso e-mail). 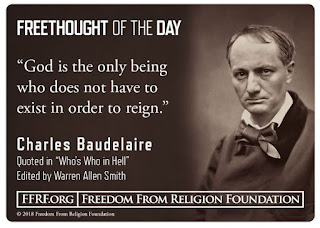 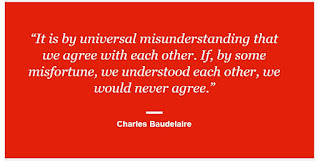 It's a weird coincidence, and I won't pretend to be conversant in the universe of poetry, although the poet's life and times are worthy of consideration.

His most famous work, a book of lyric poetry titled Les Fleurs du mal (The Flowers of Evil), expresses the changing nature of beauty in modern, and rapidly industrializing Paris during the mid-19th century. Baudelaire's highly original style of prose-poetry influenced a whole generation of poets including Paul Verlaine, Arthur Rimbaud and Stéphane Mallarmé, among many others. He is credited with coining the term "modernity" (modernité) to designate the fleeting, ephemeral experience of life in an urban metropolis, and the responsibility of artistic expression to capture that experience.

Admittedly the concept of decadence is intriguing: "The Decadent movement was a late-19th-century artistic and literary movement, centered in Western Europe."

The concept of decadence dates from the eighteenth century, especially from the writings of Montesquieu, the Enlightenment philosopher who suggested that the decline (décadence) of the Roman Empire was in large part due to their moral decay and loss of cultural standards.[4] When Latin scholar Désiré Nisard turned toward French literature, he compared Victor Hugo and Romanticism in general to the Roman decadence, men sacrificing their craft and their cultural values for the sake of pleasure. The trends that he identified, such as an interest in description, a lack of adherence to the conventional rules of literature and art, and a love for extravagant language were the seeds of the Decadent Movement.