Amid the vapid intellectual carnage inflicted by pay-to-play Gahanism, it's worth thinking about George Orwell's fundamental truthfulness.

The embedded video above, complete with photo of George Orwell wearing a bizarrely uncharacteristic Hitler mustache, features Christopher Hitchens and George Packer (circa 2009).

George Packer and Christopher Hitchens talked about George Orwell and his work. Mr. Packer selected the pieces that appear in two recently published volumes of George Orwell’s work: Facing Unpleasant Facts and All Art Is Propaganda. Mr. Hitchens, essayist for The Atlantic Monthly, is the author of Why Orwell Matters.

Hitchens and Packer manage to stay on task for most of the program, though things start coming off the rails near the end, when Hitchens indulges in Iraq War apologetics. Overall, it's a thought-provoking hour with two erudite men.

At YouTube, there is a five-part BBC Arena series on Orwell's life. The segments are just shy of an hour, each. It's a bit dated, but invaluable for the testimony of interviewees now long dead.


Part 1 - Such, Such Were the Joys
Part 2 - Road to Wigan Pier
Part 3 Homage to Catalonia
Part 4 The Lion and the Unicorn
Part 5 Nineteen Eighty Four
Finally, here's something I wrote back in February, 2010: New York Times: "Why Orwell Endures."

It strikes me as the stuff of wretched cosmic injustice that Orwell and Hitchens died far too young, while Franklin Graham will remain to torment us with drivel for so many years to come.

A collection of George Orwell’s essays proved to be the surprise reading hit of my Christmas vacation. I picked it up at the library book sale, and tossed in the carry-on bag as an afterthought. It's a good thing I did, seeing as the remainder of my magazines and books were stowed in delayed luggage.

Essay topics in the ancient paperback, which became shredded into unbound pages soon after opening, ranged from memories of shooting a rampaging elephant while posted as a policeman in Burma to researching the origins of bawdy English postcards. Orwell wrote not only of lofty topics such as his service for the Republic during the Spanish Civil War, but also described in excruciating detail his recollections of boyhood boarding school days, experiences so quintessentially English that they might be lampooned by the likes of Monty Python without we Americans never really imagining the real-life sources.

As a piece in today’s New York Times by Geoffrey Wheatcroft makes clear, Orwell may not have been right 100% of the time, but his pursuit of truth and unwavering intellectual honesty remains noteworthy by comparison to many of his ideologically compromised peers. They are qualities worth cherishing. 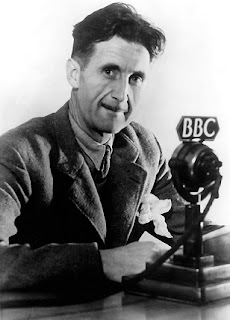 Whenever perplexed Americans fret over Osama bin Laden or suicide killings, and delude themselves that material progress will cure these ills, I think of what Orwell wrote in 1940 about another charismatic monster. “Hitler, because in his own joyless mind he feels it with exceptional strength, knows that human beings don’t only want comfort, safety, short working-hours, hygiene, birth control and, in general, common sense; they also, at least intermittently, want struggle and self-sacrifice. . . . However they may be as economic theories, Fascism and Nazism are psychologically far sounder than any hedonistic conception of life.”