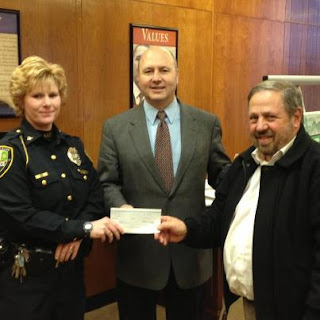 Bar none, my favorite photo of the year to date.

In it, the local representative of the utility monopoly known as Indiana-American Water Company presents two checks, one to the police department (for protection from the monopoly's numerous irate victims??) and the other to the bicentennial junta for an "old-timers baseball game" ... seriously, to the Coup d'Geriatrique, could there be any other kind? You weren't expecting a "future stars" game, I take it.

The money pictured above constitutes roughly 1/3 of the sales deprived from my company by the thieving, incompetent bastards at IN-AWC on that glorious spring day back in 2010, when the water monopoly's long-term and congenital neglect of its own infrastructure led to an enforced day-long shutdown of the Pizzeria and Public House on a Gravity Head Friday.

Recall also that last year, our city council was compelled to write legislation clearly requiring IN-AWC to repair the extensive damage it does to streets on a regular basis, destruction generally commenced only moments after the street in question has been repaved by the city for the very first time since the Carter Administration.

I repeat: NAC is in complete agreement with any elected official, unelected official, ordinary citizen or random footloose Chia pet who wishes to eliminate any and all loopholes permitting those unsupervised rat bastards at Indiana-American Water to run roughshod over taste, decency and recently paved streets.

That's because you really can trust IN-AWC -- trust the water monopoly to screw you every single time.

May 11, 2012: Rat bastards at Indiana American Water are running amok.

January 27, 2011: At home or at work, Indiana-American Water Company just doesn't give a damn. Hint: Few monopolies do.