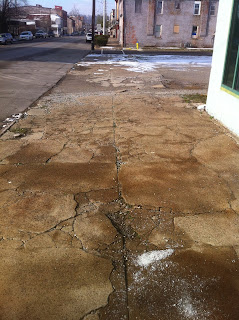 At last evening's council gathering, the third reading of a bill to tithe $75,000 from EDIT against  matching grants to repair the steeple of the Second Baptist Church was approved. Greg Phipps and Scott Blair voted against it, and Kevin Zurschmiede was absent.

Earlier in the day, I took the above photograph. To the rear left, the Reisz building can be glimpsed; last year, 2nd district council person Bob Caesar worked assiduously to prevent it and adjacent neglected buildings from being redeveloped.

In the middle of the photo there's a big, gaping, garbage-strewn, chronically unaddressed vacant spot just out of view, and the seedy sidewalk, perhaps last considered during the Eisenhower administration, occupies center stage. This is the spot where people will gather to stand and admire the church steeple, deemed so vital when SO MANY OTHER THINGS IN THIS TOWN NEED TO BE DONE.