ON THE AVENUES: You can call me Che. 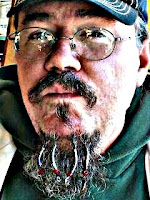 ON THE AVENUES: You can call me Che.

Do you ever get the feeling you’re being watched?

The sensation of which I speak isn’t an irrational state like paranoia, which in the case of our New Albanian milieu is a condition monopolized to such an impressive degree by the founder of the Cracked Kitchen Linoleum Blog that it might as well be patented as a brand name – perhaps Yvonnanoia?

No, what I mean is the suspicion that you’re being toyed with, prompted and set up, suddenly confronted with a situation so weirdly surreal that a hidden camera surely must be aimed your way, primed to capture your dumbfounded, flailing reaction for speedy editing into a video, and posting on YouTube, where it will be greeted virally with the guffaws of the uneducated, addled masses.

My former manager at Scoreboard Liquors must have felt this way on that infamous day thirty years ago when a stranger walked in, pointed at the door to the rear office, and asked, “Do you mind if I go back there and change my pants?”

YouTube obviously didn’t exist back then, but Lloyd “Duck” Cunningham’s unprintable reply would have played well on Candid Camera, with Allen Funt suffering the brunt of the beeped-out epithets.

As the first week of the New Year unfolded, my inbox disgorged a question.

A little while ago I noticed there was a room that had pictures of several mass murdering, genocidal, tyrannical dictators on the walls. As a customer what meaning should I take from that? In my opinion it seems to show support from the owner of New Albania of these tyrants?

I enjoy the pizza at NABC but I don't enjoy the thought of supporting someone that idolized people like the pictures and posters you seem to proudly display. Maybe I misunderstand their meaning.


My initial reaction was anger: Who’d gone and pulled down my Commie posters, and replaced them with fascists like Hitler, Mussolini and Idi Amin? Then I realized he was referring to Red Room stalwarts like Lenin, Castro and Gus Hall. Well, fair enough, because it all depends on where you’re standing.

Here’s what I told him in reply.

It isn’t necessarily a misunderstanding on your part, but what I can tell you with certainty is that there is no idolatry on mine.

I remain a leftist, broadly speaking, and I traveled in the East Bloc and USSR as a young man in the 1980s, but while I found these countries fascinating from a number of standpoints, they were not places where I ever wished to live.

Your question is asked every now and then, and my answer always has been the same: The Red Room means whatever the observer wishes for it to mean: Kitschy poster art emporium, as spoils of Cold War victory or a shrine of reverence.

However, the primary intent for me is for it to serve as a talking point to help keep a piece of still-recent history living, in the sense that with each passing year, fewer (mostly younger) customers have any idea what the era even was about.

The verdict of history is fairly clear when it comes to the legacy of Stalin and Mao, and I have confidence that interested parties will reach that conclusion, as you and I surely have. But they must first be interested, and motivated to investigate. In my view, the Red Room periodically serves that purpose.


To the best of my knowledge, the preceding explanation is true. As for what I might have been thinking twenty years ago with regard to the space now known as the Red Room, it’s also true that my prime motivation at the time was to have a place to display the many period propaganda pieces hauled home from travels abroad. One thing led to another, and there it was.

I’m the first to admit there is as little to idolize on Stalin’s part as Hitler’s, but to repeat, the point lies elsewhere. Now that decades have passed and the older generations have departed, precious little discussion takes place about the “-isms” dominating the entirety of the 20th century … and sorry tea-baggers, but loud ranting amid voluminous spittle about communism in the context of “Obamacare” does not suffice as earnestness.

Forgetting history begets repeating it, as either Santayana or Carlos Santana once said. It is my intention not to do so.

But my favorite example of work- and history-related consumer behavior occurred not at the Public House, but at Bank Street Brewhouse not long after we opened in 2009.

One of our servers was asked to explain Roger’s political beliefs in light of the red stars and leftist images on the shiny new brewing equipment visible just past the window.

Our man on the floor at the time, who’d studied some history and poli-sci, made a game effort to interpret these complex threads of geopolitics, economics and the art of brewing, and to phrase them in snappy sentences reproducible on bumper stickers for a Lexus, and yet the customer remained unimpressed, writing this on his charge card receipt:


In order to accentuate his displeasure with my cheeky political proclivities, this rather boorish scion of an identifiably Falangist regional family left the gratuity column empty, thus stiffing the server while doing me no harm whatever.

Not only that, but the customer was utterly mistaken; in fact, I share the wealth of my knowledge every day, as teachers are wont to do, and in this vein, permit me to repeat my advice to the server should such a question ever be asked again:

At least the person who sent you the email asked. still, I doubt that your answer satisfied him/her.