Remembering Matt Brewer, bidding Williams Plumbing an affectionate farewell and beseeching City Hall to give a damn about public safety. 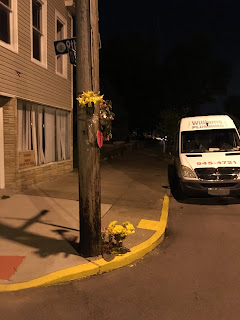 One year ago yesterday, Matt Brewer was struck and killed NOT by a minivan, as stated in this article, but by a DRIVER.

Apparently the minivan's DRIVER was exonerated on the scene by the NAPD, and later by the Floyd County Prosecutor, although we can't know any of this for sure because there exists no clear pathway for the general public to know the results of such investigations even though the facts are essential.

There is zero transparency in such matters, because the American legal system seems to be constituted to protect drivers of automobiles first and foremost, not non-drivers who suffer the brunt of auto supremacy's daily mayhem.

However there remains a very good chance that Matt was struck and killed owing to the obstruction of an illegally parked Williams Plumbing truck on the northeastern corner of Spring and 9th, as I documented last year in this series of nighttime photos. Watch as the red car approaches, disappears for an instant behind the truck, then reappears to continue speeding down Spring.

It literally constitutes a "dead man's curve," with the dogleg in the street constituting the first hazard, then the commercial vehicles stacked at the corner -- and, of course, dangerous speeds have NOT been reduced by City Hall's ineffectual "calming." 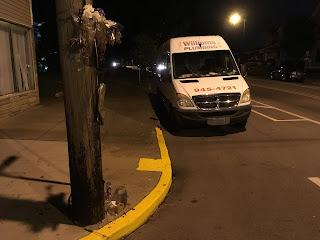 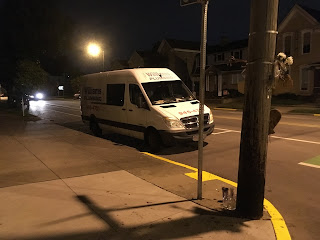 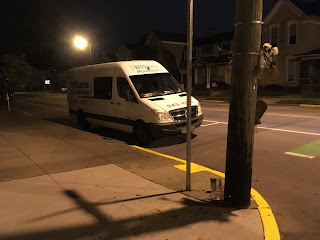 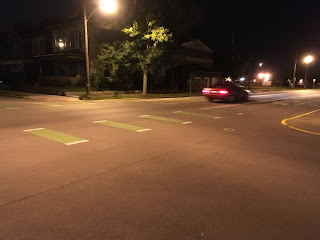 In fact these commercial vehicles have blocked sight lines at this corner since 1987, when Williams Plumbing bought the building and converted it to what amounts to an industrial use, which in practice has meant neglecting it consistently into a neighborhood eyesore. 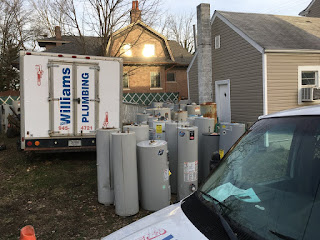 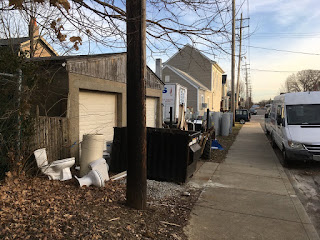 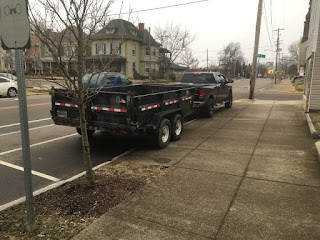 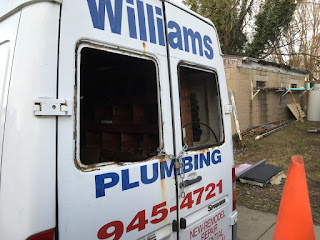 In fact, I've been pointing to all of this -- the parking violations, the dilapidation of the building and the cheek of it all -- almost from the inception of the blog.


All of it to a rousing chorus of snores from city officials, who for 32 years have been shirking THEIR responsibilities.

Non-learning curve: This ON THE AVENUES column repeat reveals that since 2011, we've been discussing the safety hazards on Spring Street between 10th and 9th. Too bad City Hall is deaf.


Earlier this year I asked street commissioner Mickey Thompson if something had  been said at long last to Williams Plumbing about the illegally parked trucks, as I'd noticed they'd been moved around the corner to occupy public parking spaces on THAT street, not Spring (still illegal, by the way, but less of a public safety hazard).

Thompson said yes -- because he'd said something, not ordinance enforcement, the existence of which is rumored though not always witnessed save for street sweeping day.

Two weeks later the trucks began appearing parked on the southwestern side of Spring, blocking vision there, then predictably soon returned to their previous location of 32 years by the sidewalk in front of the decaying building.

I'll leave it to others to memorialize Matt, for whom I still mourn -- not as a spouse or the closest of friends, just as an acquaintance, neighbor and fellow lover of life whose day always was brightened when our paths crossed. As Rickert's story below well illustrates, Matt inspired many and will continue to do so. We mustn't forget him.

Speaking for myself as a heretic, rabble-rouser and all-purpose irritant, I'm as angry today as I was last year, but "adulting" means sublimating anger into something positive. Ideally this would be Jeff Gahan and his merry crew of oblivious car-centric campaign finance leeches deciding finally to take action to make the city safe for non-automotive users, but I know this isn't going to happen.

Consequently I take great joy in this announcement. 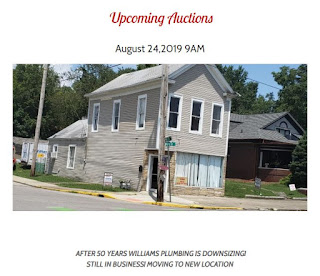 As far as I'm concerned, good riddance. A bit of advice to neighborhoods around the city: be on the lookout for a relocated Williams Plumbing. One of your buildings is about to be trashed.

Hopefully the structure, once a delight when Cora Shrader owned it, isn't too far gone that it can't be saved, and put to better use than Williams Plumbing has these past 32 years.

Matt, you're missed. You remain an inspiration, but you deserved better from the mouth-breathing cretins who run this city.

This is how friends and family described Matt Brewer at a memorial skate Tuesday at Silver Street Park in New Albany, an event that allowed them to come together and celebrate the man they lost one year ago.

Matt died Aug. 6 of last year at the hospital from injuries suffered when he was hit by a minivan at Spring and Ninth streets. He was doing what he loved most at the time of the accident — skateboarding — and those who knew him said he leaves behind a legacy of inspiration and positivity in the local skate community.

"He loved it," his mother, Judy Brewer, said as she and other family members sat under a shade tree Tuesday afternoon, watching his friends skate the park in his memory. "If he wasn't working, he was skating. All the time. He'd just go down to the park and skate all hours of the night."

The day after Matt died last year, dozens of friends showed up to the skatepark at the New Albany riverfront — a spot where Matt had spent a lot of his time — to show their love. His mother said it made her happy to see them out again Tuesday at the one-year anniversary.

"I think it's great," she said. "It's nice that people still remember him and the guy he was and what he liked to do."

But those there at the park don't have any intention of forgetting the man who taught them so much — as a friend, a teacher, a supporter.

"I think a lot of local skaters just looked up to him — he was skating all the time," said Scott Thompson, who grew up with Matt and went to high school with him. "He was a really good guy, too. He was really kind."

T.J. Gusler said he started skating when he was around 13 or 14, about 10 years younger than Matt. Gusler said Matt had a way about him that made one want to do well.

"He was super supportive," Gusler said. "If you were trying something and it was like a big deal, he'd get his camera out and you're like 'Oh, Matt's excited; I'm going to keep trying to do this.'"

The memorial wasn't held this year at the riverfront park, which is undergoing remodeling to make way for a new park there as part of a skatepark/art installation project of the Carnegie Center for Art & History. He'll always be part of that riverfront space, his friends say.

"You knew every day you'd go down there and he'd be there, ready to go," said Shane Hockersmith, who was one of the scores of skaters Matt inspired throughout Southern Indiana and Louisville. "[He] would do anything for any of us, especially kids growing up who skated. He would take you to spots with him, show you how to do things, sit and talk to you.

"He was definitely the biggest supporter of skating."

Matt's spirit is one that will live on in the community, with seeds that have taken root in the younger kids. Andrew Nicholson, skater and downtown resident who helped organize Tuesday's event with the others in the skate scene, said he'd met Matt four or five years ago when Nicholson had started teaching his son to skate.

Matt had helped, teaching the 10-year-old cool tricks, supporting him and his father along the way.

This was just the way Matt was, Nicholson said. His character helped others to be better.

"Seeing him constantly going at it inspired other skaters to keep going," Nicholson said. "I've never seen Matt mad; he always had a smile. Even if you weren't a skater you always got greeted with a smile."

Nicholson called the local skate community "very tight, very close, very supportive," which was evident in the faces of those who turned out to honor their friend.

"The skate community here in Southern Indiana and Louisville is an encouraging group of guys, girls, people, who like to push one another to not only be better skaters, but be better humans," he said.