Something to consider as you enjoy your guacamole. 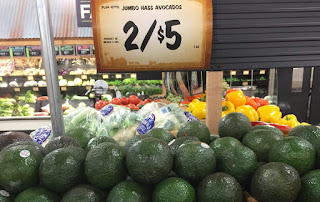 19 dead, nine of them swinging from a bridge in a town 250 miles from Mexico City.

This is about drugs, right?

Yes and no, but in the sense of insatiable demand by American consumers ...

... Falko Ernst, an International Crisis Group researcher who studies Mexico’s cartels, said this week’s slaughter was clearly intended to intimidate rival criminal groups, the families of their members, as well as Mexican authorities.

Ernst said the bloodbath was partly about the struggle for control of Uruapan’s local drug trade. But a more important motivation was the fight for the region’s billion-dollar avocado industry. “The big magnet here is avocados,” he said.