Social connections at the grassroots, or “the antidote to neoliberalism.” 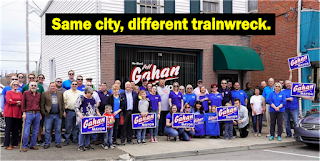 It doesn't result in campaign finance kickbacks from the usual top-down suspects, but it might just work.

Paging Mark Seabrook and the local GOP: our local Democrats have surrendered the initiative in such matters. It's your turn.

What do you think?

There’s an idea that could transform Britain – but Brexit won’t let it be heard, by Jonathan Freedland (The Guardian)

... (An idea to) utterly transform the public services we rely on from cradle to grave: an idea so bold and innovative it is winning admirers all over the world, its author summoned to address governments from Scandinavia to Latin America, its approach hailed on the opinion page of the New York Times as the “fix” for a broken welfare state – and yet all but ignored by the national government of the author’s home country, whose bandwidth is consumed entirely by Brexit.

It comes from a social entrepreneur by the name of Hilary Cottam. Full disclosure: I’ve known Cottam for years, long before she was named Designer of the Year in 2005 for her work reshaping schools, prisons and health facilities. She was subsequently described as being “to social design what Conran is to sofa design”.

I first met her in Washington in the mid-1990s, where she was ruffling feathers working for the World Bank. The bank’s modus operandi back then was to jet into a distant foreign capital, stay in a five-star hotel, conduct meetings with officials, then sign an agreement for, say, a $140m investment in a dam, before flying back to DC.

Cottam operated in a different way. She would head out of the capital, pitch up in a remote village or township on the outskirts and live for a week or two with the people of that community, talking especially to the women. After one such spell on the margins of Lusaka, Zambia, she heard what people there needed most. It involved water, but it wasn’t a dam. And it cost closer to $140 than $140m. What was it? A standpipe in the centre of the village – so that the women could collect water safely, rather than having to venture to a tap far out of the way, somewhere scary and dark. Simple, cheap – but utterly transformative of their lives.

Cottam did the same when she was tasked with turning around a failing school in the south London borough of Southwark. She talked to teachers and pupils and found that one reason children were not settling down to learn, why they acted as if they were not fully present, was that they never took off their coats. Why not? Because their lockers were in a badly lit corner where kids were liable to get bullied or beaten up, so no one ever went there. Cottam altered the design, bringing the lockers into the daylight: bullying went down and, thanks to that and a series of other such moves, academic attainment went up.

In the last decade or more, she’s been applying a similar approach to public services. In Radical Help – a book that’s been published from Denmark to South Korea – she describes five “experiments” in different areas of public provision, touching on every stage of life: adolescence, work, healthcare, social care for the elderly and social work for so-called troubled families. These were pilot schemes, backed by local councils who had often grown so desperate at the status quo and so determined to improve the lives of their residents, they were ready to try anything.

Take Circle, a scheme aimed at the elderly ...