LIVE TO EAT: Many familiar faces as 1816 Modern Kitchen & Drinks debuts in Corydon. 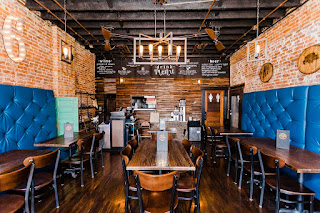 To learn about the history of the location, you'll have to click through to my article at F&D. Here's a clue: Old-timers like me ate in the same building when Richard Nixon was president.

Corydon was Indiana’s first state capitol (1816-1825), and for those of us who grew up in the area, the town always will be synonymous with the term “Old Capitol.”

Time marches on, and today, 203 years after the town’s historic Hoosier moment, 1816 Modern Kitchen & Drinks makes its debut at 100 E. Chestnut (the Shafer Building), around the corner from the landmark original capitol and across the street from Butt Drugs ...