What do you mean, "may" ask the Sewer Board for tap fee waivers? You already rammed it past them a week ago.

At last Thursday's (March 19) city council meeting, there was a discussion about perfect marriages.

Luxury rental housing project in New Albany gets another blessing, by Daniel Suddeath (N and T)

NEW ALBANY — The city is moving a 154-unit downtown apartment project along at a swift pace after the development garnered a $3.3 million commitment from the state.

“This is a big project that could not be done without a perfect marriage between the state, the city and Flaherty Collins,” said David Duggins, director of economic development and redevelopment for the city.

As part of the deal, Flaherty Collins signed-off on a minimum assessment agreement stating the developer will be responsible for paying the TIF tax ...

... The city is expected to foot some infrastructure improvements near the apartments, which could be under construction by late summer, and the New Albany Sewer Board may be asked to waive tap-in fees. Councilwoman Diane McCartin-Bendetti asked the administration to consider other incentives to waiving the tap-in fees.

It wouldn't be the first "perfect" marriage undermined by loose interpretations of the truth, because it seems that the Sewer Board already had been asked -- in fact, actually had approved the waiver at its meeting of March 12, a full week before the council's gathering, saving the developer somewhere in the neighborhood of $350K. From the board's March 12 minutes ... 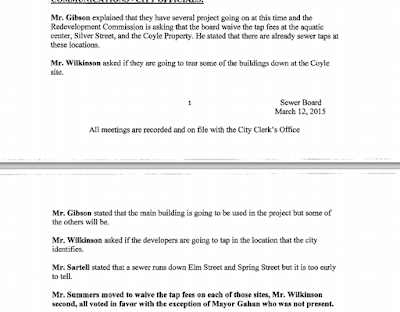 I wonder when City Hall was planning on breaking the waiver news to council ... or perhaps they did, and Paddy Mac just torched the memo on sterno, like Mission Impossible.

This comes after the recent revelation that city attorney Gibson forgot the contents of the stormwater ordinance he wrote, and Pat McLaughlin forgot that council appointments are supposed to be made by council -- and is this really the sort of "fix always in" game-playing we need?

Yes, they build lots of nice things with your grandchild's future tax revenues, but where's the transparency?

And as pertains to the sewer board's waiver, where's the truthfulness?

Gibson on Summers on Stormwater: "The simplest answer is that it was an error on my part."

I loved reading the minutes of that Sewer Board meeting. All voted in favor EXCEPT Mayor Gahan who was not present.

It's easy enough to accomplish the goal. The Redevelopment Commission OR the city council can pay the hook-up fees for them.

This administration always chooses the path with the least integrity. They refused to grant waivers to IUS for their dormitories. That was arguably a spot where a subsidy might be valid.

It's simple. Don't rob the utility of resources. Don't treat it like a piggy bank like Gahan has done for most of his dozen years in office. If they think it's a public good, pay the fees for the developers. Don't subtract from the assets of the municipal utility.

Just another glaring example of the heavy handed unethical actions of this administration. Waiving tap fees because they are a big developer who most likely put cash in the Gahan "I am for sale" Mayoral campaign committee.

news flash, by Indiana Code 36-9-23-4 Larry Summers can not be on the sewer board either therefore his vote to approve the free sewer taps was not valid legally